I’m like the millionth person to pile on this Suzanne Sommers editorial (seriously, what was the WSJ thinking?), but I have to get my two cents in. Jonathan Chait has done his usual masterwork, and Josh Barro crushed it as well. I want to focus on some of her claims about Canada:

It went on to say that young Canadian medical students have no incentive to become doctors to humans because they can’t make any money. Instead, there is a great surge of Canadian students becoming veterinarians. That’s where the money is. A Canadian animal can have timely MRIs, surgeries and any number of tests it needs to receive quality health care.

Yeah, cause doctors are homeless in Canada. Here are some actual data:

[R]esearch, led by Jeremy Petch of the Li Ka Shing Institute of St. Michael’s Hospital in Toronto, calculated net payments to physicians in Ontario. To do so, they looked at physician overhead costs, as collected in the National Physicians’ Survey.

Overhead varies widely by specialty, from 38 per cent for ophthalmologists to 10 per cent for medical oncologists, and, of course, many hospital-based docs have little or no out-of-pocket costs. Overall, overhead for Canadian doctors is 26 per cent of their billings. Because that number is self-reported, it may be a tad overstated, but it’s the best figure available.

Practically, that means Canadian doctors have an average annual income (before taxes) of a little more than $225,000.

How out of touch do you have to be to think salaries like that equate to “can’t make any money”?

All of my husband’s cousins are doctors. Several have moved to the U.S. because after their years of intensive schooling, they want to reap financial rewards.

Ah, yes. It’s the “everyone knows a doctor who left Canada to move to the US ” meme. I can’t bring myself to try this again, so here’s my old post:

So when emigration “spiked,” 400-500 doctors were leaving Canada for the United States.  There are more than 800,000 physicians in the U.S. right now, so I’m skeptical that every doctor knows one of those emigres. But I’d especially like you to pay attention to the yellow line, which is the net loss of doctors to Canada.

In 2003, net emigration became net immigration. Let me say that again. More doctors were moving into Canada than were moving out. 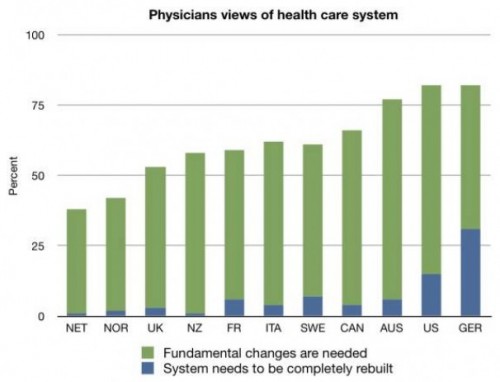 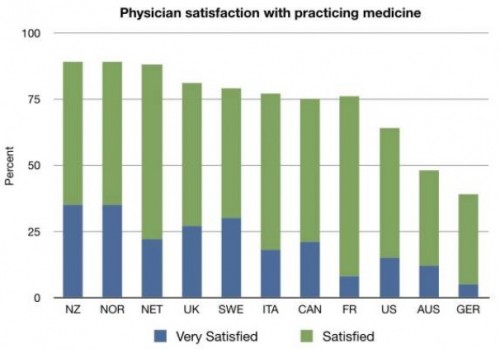 So spare me the crap about how doctors are miserable in Canada and moving here to be happier. The opposite is true.

My 75-year-old Canadian girlfriend was denied treatment because she was too old. She died recently, having been given palliative care. That’s all the system would allow.

Does anyone actually believe this crap? There is nothing, and I mean NOTHING, in the Canadian health care system that denies care to people based on age. One of the only relevant studies I’ve ever seen comparing the US to Canada is this one (emphasis mine):

Research from Canada and the United States suggests that not offering dialysis to patients who might benefit still occurs. This study was conducted to investigate nonreferral and nonacceptance to dialysis by primary care physicians (PCPs) and nephrologists in these countries. We surveyed a random sample of Canadian and US PCPs and nephrologists concerning their attitudes toward and experience with withholding dialysis in patients with advanced chronic renal failure. In response to a question about whether the physician believes there should be an age beyond which dialysis should not be offered, 12% of Canadian PCPs, 20% of US PCPs, 4% of Canadian nephrologists, and 9% of US nephrologists answered yes. When asked about their recommendations concerning dialysis initiation in 10 vignettes of patients with impending end-stage renal disease (ESRD), the responses of Canadian and US physicians were similar. PCPs compared with nephrologists were less likely to recommend dialysis in cases with physical illnesses and more likely to recommend it in cases with neuropsychiatric impairments. Over a 3-year period, 13% of Canadian PCPs and 19% of US PCPs reported nonreferral to dialysis at least once. Withholding rates were 25% for Canadian PCPs, 16% for US PCPs, 13% for Canadian nephrologists, and 17% for US nephrologists. We conclude that although nonreferral of patients who might benefit from dialysis still occurs, it does not seem to be common, and the attitudes of Canadian and US physicians toward this issue are similar and could not entirely account for the much greater incidence of treated ESRD in the United States. PCPs and nephrologists should continue to be educated about the modern criteria for patient selection for dialysis.

Look at the first bolded statement. It says that more doctors in the US believed that there should be an age at which we should not offer dialysis. MORE IN THE US. The second bolded statement shows that more primary care doctors in the US reported actually not referring people for dialysis. MORE IN THE US. Withholding rates themselves were somewhat balanced, higher in Canadian PCPs, but lower in Canadian nephrologists.

What is clear, however, is that there is no evidence for Canadian doctors withholding care from people because they are old.

There are many legitimate reasons to dislike the ACA. None of her “Canadian” attacks come even close.

I look forward to more “corrections” in the WSJ about this piece. It’s a classic.