Autism rates are up again according to the CDC

We’ve reached the point at which I officially become skeptical:

One in 68 U.S. children has an autism spectrum disorder (ASD), a 30% increase from 1 in 88 two years ago, according to a new report released Thursday by the Centers for Disease Control and Prevention.

This newest estimate is based on the CDC’s evaluation of health and educational records of all 8-year-old children in 11 states: Alabama, Wisconsin, Colorado, Missouri, Georgia, Arkansas, Arizona, Maryland, North Carolina, Utah and New Jersey.

This new report claims that 1 in 42 boys has autism. What I’m having a hard time believing is the rate of increase in recent years: 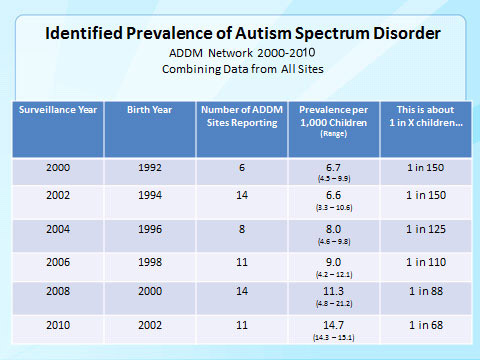 If this is true, the prevalence of autism doubled between 2004 and 2010. If this is true, and if we believe this will continue, then it’s hard not to see this as the biggest health threat around.

I’d be panicked about this, if it didn’t seem improbable. I’m a pediatrician, and I see lots of kids. I swear to you, the vast, vast majority of them don’t have autism. My three kids are in public school, and know tons of kids. Very few of them have autism. My many acquaintances have many kids. Some of them have autism, but the prevalence does not feel like 1 in 68. Nor does it feel like the prevalence has been doubling like seen here.

And I acknowledge that my experience is not “data”. I’m totally open to the fact that I could be wrong. But these numbers don’t seem to gel with experience.

Especially given this: a decade ago, two thirds of children diagnosed with autism had below-average intelligence; today that number has dropped to about half. This means that the largest increase in autism was seen in children with average or above average intelligence.

The study claims that the definition of autism and how it’s diagnosed has not changed. But it seems that the children being diagnosed are different than those who used to be diagnosed. They are of higher intelligence.

Please don’t take this to mean I’m minimizing autism. As I’ve said many times, I am passionate about diagnosing and treating autism in a timely manner. I’m working on NIH-funded research to make that happen. But one of the biggest problems we face today is that the means to care for kids with autism are overloaded. There are huge waiting lists. We are overwhelming the system.

These data will be taken to mean that autism is “spreading”. I’m just not sure that’s the case. I hope more thorough research into this is done.