Yesterday I summarized two randomized controlled trials (RCTs) that compared cognitive behavioral therapy (CBT) to pharmacological therapy (PCT) and placebo for insomnia. I also mentioned that there was a third, by Siversten and colleagues. I’ve now read it, and it corroborates the results of the other two. It considers yet another drug, zopiclone. So across the three studies, three different drugs have been compared to CBT, and in none of them does PCT offer an advantage over CBT.

Results: CBT resulted in improved short- and long-term outcomes compared with zopiclone on 3 out of 4 outcome measures. For most outcomes, zopiclone did not differ from placebo. Participants receiving CBT improved their sleep efficiency from 81.4% at pretreatment to 90.1% at 6-month follow-up compared with a decrease from 82.3% to 81.9% in the zopiclone group. Participants in the CBT group spent much more time in slow-wave sleep (stages 3 and 4) compared with those in other groups, and spent less time awake during the night. Total sleep time was similar in all 3 groups; at 6 months, patients receiving CBT had better sleep efficiency using polysomnography than those taking zopiclone.

Conclusion: These results suggest that interventions based on CBT are superior to zopiclone treatment both in short- and long-term management of insomnia in older adults. 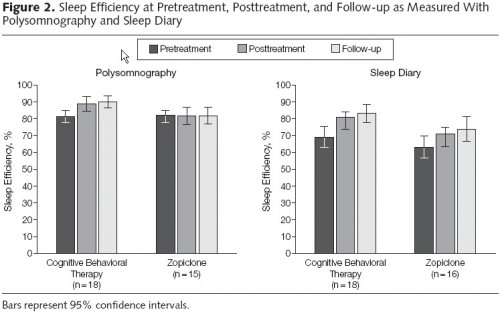 The authors cite a paper that estimates the direct medical costs associated with insomnia to be about $14 billion per year in 1995. I’d love to see an updated figure. Medical inflation (6.5% per year, typically) would suggest it is closer to $40 billion today. If proportionally more people are suffering from insomnia (which is plausible) then the cost could be higher. We’re starting to talk about a lot of money. Most people with insomnia (85% of them, say the authors) go untreated. Since sleep difficulties are more common in older adults (that the population is aging is one reason why there could be more insomniacs today than in 1995), a lot of the health spending that results from under-treatment is taxpayer financed (Medicare). Of course, employer-based insurance is tax financed too (the tax subsidy), and your premium dollars help fund your colleagues’ health spending. It may be worth kicking a few more dollars toward CBT. It’s actually pretty cheap. The course I’m following cost me about $40.

The authors also note that PCT is “the treatment of choice for insomnia” among primary care physicians. I am willing to believe a lot of patients demand it, whether informed by direct-to-consumer advertising or just on the typical presumption that there must be a solution in a pill. What I’d like to know from the physicians who offer PCT is whether they also suggest CBT. Do they routinely tell patients that CBT has been shown to be more effective? If not, why not?