And now I have to defend doctors’ salaries, a little

Sarah Kliff has a post up with some up-to-the-minute data on how much doctors make. The first chart, showing doctors’ starting salaries, is the kind of graphic that’s going to make a lot of doctors get quickly defensive: 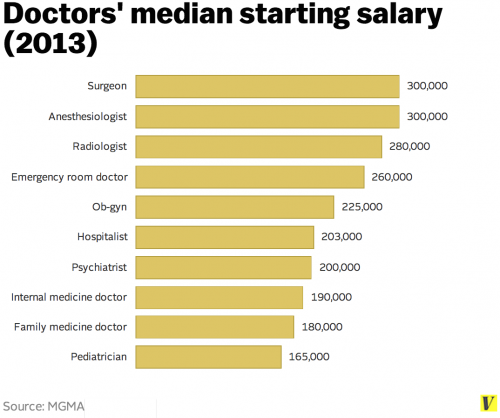 When the median starting salary for your profession is well into the 6-figures, it’s hard to go out in public and complain. And, yet, some do. On the other hand, though, I had to finish the twenty-fifth grade to be an academic pediatrician. Many docs need even more schooling to be what they are. So it’s not crazy to think they might earn a lot.

That said, I’m going to take exception with what Sarah said later on:

Doctor salaries are a pretty significant part of the reason why the United States spends more per person on health care than any other developed country. About 56 percent of all medical spending goes to paying doctors, rather than buying prescriptions, for example, or medical equipment.

I have to check my data, but I think that 56% is for paying all healthcare workers, not doctors. Healthcare workers compose an enormous part of the workforce, more than 10% of all employed people. In 2010, more than 14,000,000 people worked in healthcare. Well under a million of them are doctors.

That’s not an insignificant amount of money. But it’s not the major cause of our over-spending on health care. Physicians make a lot of money, as I’m quick to point out, but that doesn’t mean it’s totally undeserved, or that it’s the rate limiting step in getting spending under control.