Once more unto the breach…

Austin has been working on his trolling skills. He’s alerted me to another op-ed in the WSJ written by an orthopedic surgeon threatening to walk away from it all.

In the interest of providing some media strategy, I’m going to go through this bit by bit. Let’s begin:

In my 23 years as a practicing physician, I’ve learned that the only thing that matters is the doctor-patient relationship. How we interact and treat our patients is the practice of medicine. I acknowledge that there is a problem with the rising cost of health care, but there is also a problem when the individual physician in the trenches does not have a voice in the debate and is being told what to do and how to do it.

OK, right off the bat, you’re claiming that you have no voice in the debate as you are being published in one of the most read op-ed pages in the country. You know who doesn’t have a voice? The 300-plus million people who don’t get to have their thoughts heard in the WSJ.

As a group, the nearly 880,000 licensed physicians in the U.S. are, for the most part, well-intentioned. We strive to do our best even while we sometimes contend with unrealistic expectations. The demands are great, and many of our families pay a huge price for our not being around. We do the things we do because it is right and our patients expect us to.

We also do it because it’s what we want. It pays pretty damn well. It provides us a level of prestige and respect that almost no other career bestows. It even sometimes gets us on the WSJ op-ed page. But a lawyer, of all people, sent me an email that pretty much was spot on. He said, “Most people have to choose between doing God’s work and being in the 1%. Only doctors get to do both.”

Across the country, doctors waste precious time filling in unnecessary electronic-record fields just to satisfy a regulatory measure. I personally spend two hours a day dictating and documenting electronic health records just so I can be paid and not face a government audit. Is that the best use of time for a highly trained surgical specialist?

In addition to the burden of mandated electronic-record entry, doctors also face board recertification in the various medical specialties that has become time-consuming, expensive, imposing and a convenient method for our specialty societies and boards to make money.

I hate studying for boards, too. But being a doctor is hard. If it was easy, everyone would do it. Additionally, who do you think is running those specialty societies and boards? It’s doctors. So… take your beef up with them.

Meanwhile, our Medicare and Medicaid reimbursements have significantly declined, let alone kept up with inflation. In orthopedic surgery, for example, Medicare reimbursement for a total knee replacement decreased by about 68% between 1992 and 2010, based on the value of 1992 dollars. How can this be? Don’t doctors have control over what they charge for their services? For the most part, no.

Once again, it’s somewhat tone deaf in today’s economic climate for the people at the top end of the socioeconic spectrum to complain so publicly about how little they are paid, when they’re still being paid really, really well compared to everyone else. It’s fine to believe that you deserve more because you are awesome. I bet tons of people believe that in all kinds of fields. They just don’t take to the WSJ op-ed page to say so.

I don’t know about other physicians but I am tired—tired of the mandates, tired of outside interference, tired of anything that unnecessarily interferes with the way I practice medicine. No other profession would put up with this kind of scrutiny and coercion from outside forces. The legal profession would not. The labor unions would not. We as physicians continue to plod along and take care of our patients while those on the outside continue to intrude and interfere with the practice of medicine.

Again, with the hyperbole. I promise you, medicine is not the only profession with mandates and outside interference. I have lots of friends who are not physicians, and they complain about this stuff all the time. Moreover, tell a teacher that they never plod along and take care of your kids while (1) being in a union, (2) dealing with tons of outside interference, and (3) making much, much less.

We could change the paradigm. We could as a group elect not to take any insurance, not to accept Medicare—many doctors are already taking these steps—and not to roll over time and time again.

Less than 1% of physicians opt out of Medicare. More than 40% of them are psychiatrists. Your colleagues aren’t joining you.

Here’s the big issue. You’re crying wolf. You’re threatening (at age 58) to quit in 10 years. That’s not a threat. It’s normal, and it’s lucky in this day and age. I agree that physicians have a lot to say about the practice of medicine. But the hyperbole and the empty threats aren’t helping. I could go on and on about the many, many, many op-eds written by high-earning physicians threating to quit or stop accepting Medicare. I can find almost no such doctors who actually do.

I write pieces like this not because I want to point out that doctors are greedy. Nor do I do it because I “hate” doctors. I think physicians are great. I happen to be one. I happen to know many of them. Just about all of them went into medicine for noble, good reasons. They all drank the Kool-Aid. They all want to make the world a better place. I just think they could do a better job of remembering that, and of making sure that they realize that in many ways, things aren’t as bad for them as they think.

I also think they could do a better job about sticking to the things that are really wrong with health care today, things that might be fixed to make practicing more efficient and better, while not complaining about salary and a lack of “respect”. Those latter things aren’t “owed” to you. Complaining won’t get you them.

I’ll keep poking doctors with a stick. That’s how I show my love.

UPDATE: A reader points me to this slideshow. Consider slide three and remember the op-ed author is complaining about knee-replacement reimbursement: 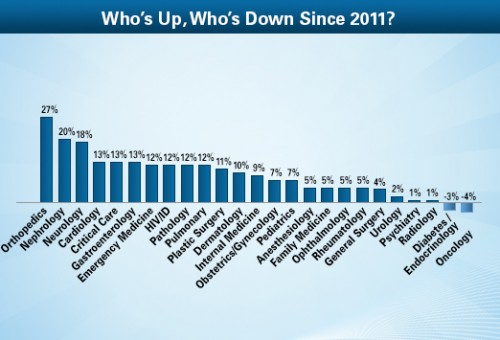