The following is a guest post by John Nyman, Professor of Health Policy & Management, University of Minnesota School of Public Health.

Below is a table that I use in my health econ classes. It is now a little outdated, but shows that our G7 peers spend half as much as we do on healthcare but go to the doctor twice as often and spend twice as many days in the hospital as we do. This suggests to me that the big difference between the US and the other G7 countries is the prices. There are some caveats: we have more outpatient care, our use of technology might be greater, we might have a different (younger) population, and so on. While accounting for these differences may reduce the magnitude of the difference in costs, the central story, I think, remains true. 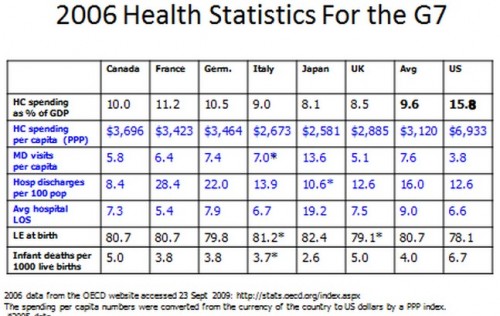 Juxtapose these data to the use of all-payer rate setting by government agencies in France, the UK, Japan, Canada, and possibly Italy, and you have a strong argument for a causal relationship. In Germany, sickness funds negotiate prices with the providers (and global budgets are imposed on spending), so there is less monopsony power, and Germans pay relatively more for healthcare as a result. Insurers in all these countries, including Germany, are non-profit.

Because of the ascendant health insurance theory in the US (purporting to show that the additional health care consumed when insured is not worth the costs), the results of the RAND Health Insurance Experiment (purporting to show that additional care has no significant effect on health), and the political interests of the providers, we have spent much of the last 40 years trying to reduce healthcare costs by reducing the quantity: cost sharing, managed care, consumer-driven health care. According to the OECD data, we have succeeded, but costs are still double on a purchasing power parity basis. It seems to me that it is time to switch our focus to prices, rather than quantity, as has been suggested by a number of others, including Murray, Volsky, Mahar and Austin. There are a number of policies, including all-payer rate setting and single payer and possibly the public option, that would likely accomplish this.