Michele Ybarra and Kimberly Mitchell have a paper in JAMA Pediatrics reporting that 9% of US adolescents have perpetrated sexual violence in their lifetime (see commentary by Amanda Hess here). That’s a statistic that stops you in your tracks, so let’s review what they found and talk about what it means.

Ybarra and Mitchell analyzed a survey of 1058 youths aged 14 to 21 years. What they found was that

Nine percent of youths (n = 108) reported some type of sexual violence perpetration in their lifetime: 8% (n = 84) kissed, touched, or made someone else do something sexual when the youth knew the other person did not want to (ie, forced sexual contact); 3% (n = 33) got someone to give into sex when he or she knew the other person did not want to have sex (hereafter referred to as coercive sex); 3% (n = 43) attempted but were not able to force someone to have sex (ie, attempted rape); and 2% (n = 18) forced someone to have sex with him or her (ie, completed rape).

The percentages for types of sexual violence sum to more than 9% because some youths perpetrated multiple types. There is every reason to believe that youths underreported these stigmatized behaviours even on an anonymous survey. If so, the actual prevalence is greater than 9%.

We should be distressed that one in 10 adolescents have attempted or succeeded in forcing sex or sexual contact. But we shouldn’t be surprised. We have a myth that children are innocent. But the facts are that adolescence and young adulthood are the peak ages for violence. Here are classic data from Al Blumstein on the age-crime curve, showing that arrests for murder peak sharply in adolescence. 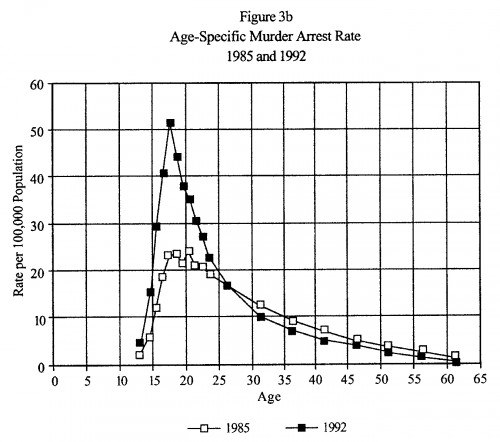 Moreover, high levels of sexual aggression among adolescents are not surprising given past data. Koss, Gidycz, and Wisniewski reported in a 1987 survey of college students that

Unlike this earlier work, Ybarra and Mitchell looked at sexual aggression by both women and men. They did not find a gender difference in the overall rate of sexual violence, although men were much more likely to attempt rape. This lack of difference is surprising, but remember that sexual aggression includes psychological coercion. Moreover, we underestimate rates of female antisocial behaviour.

I was an adolescent in the late 1960s, so I can comment on the cultural progress since then. I received no socialization about sexual consent as an adolescent and can’t even recall a discussion of it. That makes sense, because at that time the only legitimate act of sexual consent was a marriage vow, so there could be no proper consent outside of marriage. Neither was there a need to discuss consent within marriage. Marriage implied that a woman had consented from her wedding day forward. Marital rape was not recognized in any state until Nebraska criminalized it in 1976 and it was not recognized in every state until 1993.

The past 45 years have transformed our sexual culture. We now understand that sexual health is critical to adolescent health. We also understand that the ethics of consent are essential to sexuality. This is great progress. What Ybarra and Mitchell have shown us is that there is still much to do in socializing adolescents to understand and live by norms of non-violence.

*I wanted to check what the DoJ says about rape. But of course I couldn’t, because what the US purports to be a government was shut down and its websites were closed.