Joshua Wright and Judd Stone make a provocative accusation and a bold claim in their new paper “Misbehavioral Economics: The Case Against Behavioral Antitrust”:

Proponents of behavioral antitrust have implicitly adopted a model in which either incumbent firms or entrant firms are irrational, but that their counterparts generally are not. Therefore, the proponents conclude that irrational firms engage in anticompetitive behavior categorically more frequently. When one assumes any behavioral bias distributed equally between incumbents and entrants, however, we claim the policy prescriptions of behavioralists necessarily wither on the vine. . . .  We characterize this result as a “behavioral irrelevance theorem . . . .”

In fact, they claim, even “naive models” of unequally distributed irrationality fail to yield concrete policy implications, as they summarize in this table: 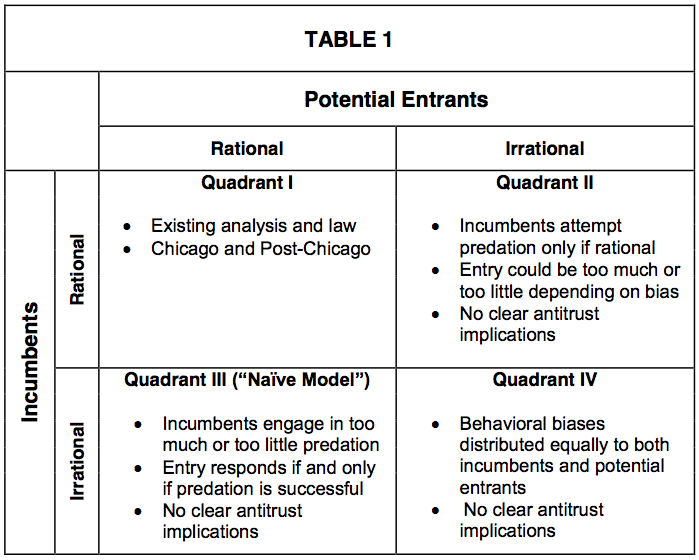 But problems arise even before Wright and Stone move on from discussing “naive” scenarios to examine their core case.  Arguing, for example, that the scenario in which irrational incumbents face potential competition from rational entrants raises no antitrust implications, they state categorically: “So long as the assumption of rational entry is held, anticompetitive behavior that successfully creates monopoly rents — whether that behavior was rational or otherwise — will result in entry.”  But this statement is false.  As a paper by Aaron Edlin that I recently wrote up points out, one of the two solutions (equilibria) of the predation game is that entry does not occur and predation is successful.  And the determining factor in whether the no-entry equilibrium holds is whether the potential entrant believes that the incumbent will cut prices to defend its market no matter what, even past the point of rationality.  Whether the incumbent is in fact irrational is clearly material to the cultivation of this belief, and thus hardly irrelevant from the perspective of antitrust.

The authors similarly ignore or discount important scenarios when considering the case of rational incumbents and irrational entrants. While the main text focuses on the obviously benign case where potential competitors are irrationally inclined to enter, the equally obviously troublesome opposite configuration is relegated to a footnote and dismissed on little more than an appeal to common knowledge that firms tend towards excessive optimism and risk taking.

But it is the heart of their thesis where the authors’ arguments seem most obviously flawed. They call it naive to assume that some but not other actors may be irrational, but are no less naive themselves in basing their “irrelevance theorem” on the assumption that irrationality is evenly distributed. If there is anything that behavioral economics teaches at the individual level, it is that cognitive biases are not evenly distributed as among actors in disparate circumstances. The endowment effect, for example, precisely inheres in whether one does or does not already possess a piece of property. If a similar divergence were to obtain, say, respecting the relative valuations of a market by an incumbent monopolist and a potential entrant, the implications for antitrust law could not so lightly be dismissed.

This is not to say that the authors do not make some valid points. They correctly point out the error in assuming that firms as entities will be subject to the same biases as the individuals they consist of. This is the fallacy of composition, of course, though I am not sure the authors have fairly caught any of their perceived opponents indulging it. Nor have they seriously engaged with the literature concerning the behavior of firms as such.

In the end, while there may yet be a sound case to be made in principle against the incorporation of behavioral economics into antitrust, Wright and Stone haven’t made it.