I was amused to read many of my favorite bloggers and journalists note with surprise the food seen at Iowa’s state fair a week or two ago. The shock! The horror! Deep fried butter! 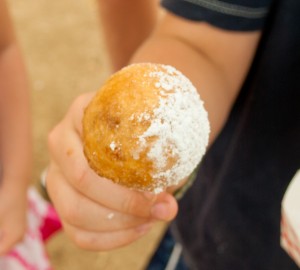 That’s nothing. It’s what we let the tourists see. Come, join me now, and let a true Midwesterner (for 8 years at least) take you on a culinary voyage unlike any other. Let me show you the wonders of the 2011 Indiana State Fair food. Full post, and lots of pictures (click to enlarge), after the break.

To start, let me introduce my crew: 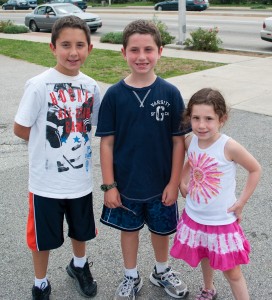 That’s Jacob (9 1/2), Noah (7 1/2), and Sydney (5). They’re not squinting because they’re looking into the sun. They’re just blinded by the awesome beauty of that which is about to befall them. My wife, Aimee, refused to be in this picture because she wants plausible deniability for what you’re about to see. I kid you not, if asked, she will declare she didn’t eat any of this stuff. She’s lying.

When we go to the state fair, we don’t go on any rides. That’s for chumps. We play no games. We may see an animal (if I can convince Aimee to suffer the smell for a few minutes). We see no shows,we watch no exhibitions, and we purchase no souveniers. We’re professionals; we’re there to eat.

The first thing I saw this year on the main drag looked almost healthy. So I took a pic: 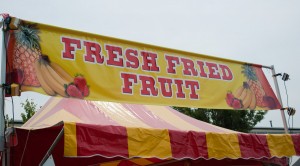 The “fresh” is what threw me off. I really thought this said “Fresh Dried Fruit”. But I was wrong. It’s fried, of course. We had to know more. So I went up and asked the kid working the fryer what kind of “fresh” fruit they were preparing. He looked at me, rolled his eyes, and said, “Dude, it’s fruit”: 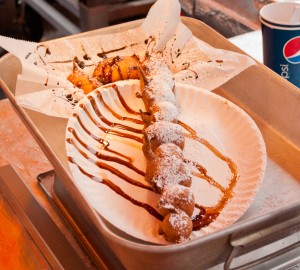 To his credit, once you take the fruit, coat it, deep fry it, and cover it with chocolate and powdered sugar, does it really matter what kind it was? We passed.

To placate my wife, we permit her to make the first choice. Every year, she chooses the “dairy barn”. We allow her to delude herself that the “freshness” of the cheese makes it somehow more healthy. She bought mozzerella sticks and a grilled cheese:

I wish you could see the disdain my boys are showing as they pose for this picture. They’re embarrassed for their mother that they have to pose with food that you could get at TGI Friday’s. A true Hoosier would have ordered this:

Now that’s dairy. Someday my kids will understand that there are things you do for Mom so that she doesn’t realize your next stop is this: 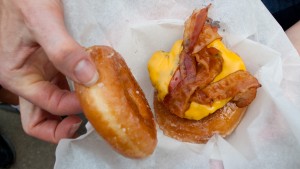 That’s a doughnut burger. They take a Krispy Kreme and put it on the griddle. Then they take a bacon cheeseburger and put it on top. No veggies for us. Of course, it’s topped with another Krispy Kreme. Noah, who has the most discriminating palate in the family, loved this. Aimee will deny liking this, but she darn well tried it. What makes the Indiana State Fair better than any other food adventure you can think of, though, is that the doughnut burger was pretty much the healthiest thing offered at the grill. Look:

There’s a French Toast Burger, with syrup of course. There’s a Chicken “Eggo” which involved a fried chicken breast, bacon, unidentifiable sauce, and a couple of fried eggs. There was even something called a “Garbage Burger” which the octogenarian woman ahead of me in line ordered. When I asked her what comes on a Garbage burger, she snapped at me, “Everything!”

But only an amateur would stop there: 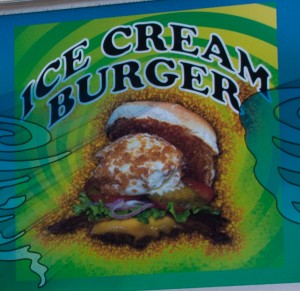 That’s an “Ice Cream Burger”. Seriously, I did not Photoshop that. Jacob debated asking for this, but realized this might push Mom over the edge. So he passed. He’s a smart boy.

After the doughnut burger, we felt like a little dessert. So we moseyed over to our favorite deep fried treats cart and ordered the Candy Combo from last year. This year we kicked in an extra buck for the deep fried butter, which you saw above. We also got two deep fried oreos, a deep fried Reeses Peanut Butter Cup: 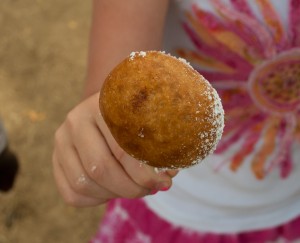 And a deep fried Snickers bar: 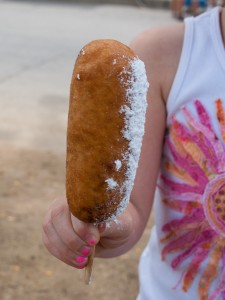 My kids, who can bicker over anything, are almost perfect angels at this moment. They wait patiently, like baby birds, facing the sky, mouths open as I gently lower each deep fried treat into their mouths for a bite. It’s the quietest 5 minutes of my whole year.

Here are some of the deep fried desserts we passed up, but others enjoyed:

I tried deep fried twinkies in 2003. Terribly disappointing. Twinkies, unlike Snickers, do not fry well.

Sometimes the deep fryer people try too hard. I think this is one of those times.

As we moved down the main food drag, we came to a booth I had never seen before:

You know what would make pizza even better? Rolling it into a ball, coating it, deep frying it, and covering it with garlic butter. What I really loved about this booth was their advertising. Evidently deep fried pizza balls can function equally as well as a meal OR a snack! Who knew? And I hope you don’t think you’re going to have just one: 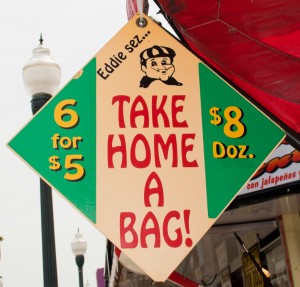 As Eddie “sez” you can get 6 for $5. Or why not make it an even dozen! Unfortunately, I think Eddie blew his entire marketing and advertising budget on his pizza balls, because this was their offered dessert: 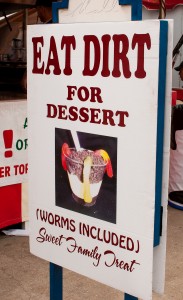 I’m not sure this is really a “sweet family treat”.

After our candy, we wanted something salty. And there were so many options! For instance, who could resist this massive pile of meat on a fryer: 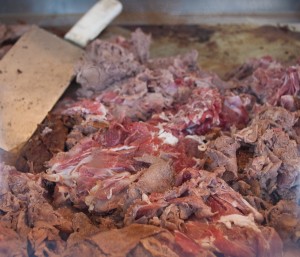 Or, perhaps, you were thinking “if only someone could take a quarter pound of bologna, turn it into a burger, fry it, and then top it off with some nice onion or tomato.” You know where I’m going with this: 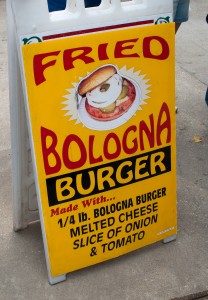 But in the end, my troops know what they like, and it’s the magic potato thing. Let me set the stage for you. They take an enormous potato and hook it onto this wonderful machine that pares it into one long, twisty strip of potato. Then they fry it, put it on a plate, and cover it in nacho cheese. And, of course, bacon: 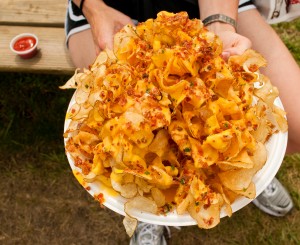 My wife, who will deny this, also likes ketchup on the magic potato. That’s why there’s a little tub of it next to her there. I wish I could make you understand how quickly this thing disappeared. I’m embarrassed for us.

A sane person would have stopped here. On fair day, though, my sanity goes away. So I turned to my kids and asked who was up for turkey leg. Noah and Sydney were in: 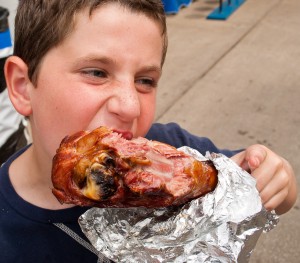 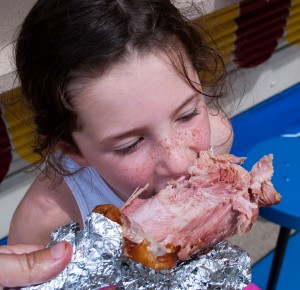 You may think this isn’t a big deal, but I swear that turkey leg weighed at least 10 pounds. And, of all the things we ate, this one the one that got me. It was delicious, but I was slightly nauseous after.

So we decided to take a break and ride the tractor around the track. That gives us a breather and allows us to see the stuff on the back side that we won’t get to. Right after we started, I was treated to this bit of irony:

“Love your heart”? Not at the Indiana State Fair.

This (below) is evidently for people who can’t get the sugar in fast enough and want to find a way to mainline it like heroin. 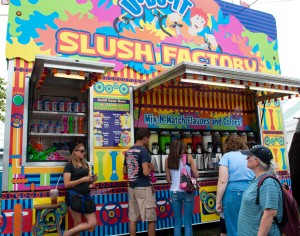 And that’s when we got a call that some friends had arrived, so we went to join them. One is a hematologist/oncologist and the other is a transplant surgeon. I wanted them around just in case my arteries clogged. My friend the surgeon calls the deep fried oreos “arterioscleroreos”, which is funny if you’re in the medical field.

They treated us to some pineapple whip, which is really good pineapple ice cream that the booth claimed has 20 calories per ounce. I think they’re lying. But, like a palate cleansing sorbet, this washed away the turkey nausea, and allowed us to resume eating. Sydney had been asking for an elephant ear all day: 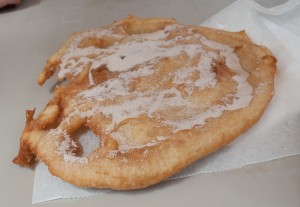 I think this is what you get if you took the deep fried oreo, took out the oreo, placed the “fry” on a plate, and covered it with cinnamon sugar. Fun fact! I learned that in Canada, they call these “beaver tails”.

We finished things off with a funnel cake: 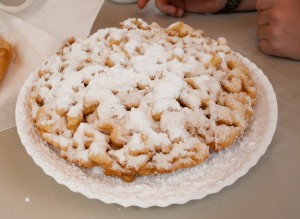 This is what you get if you take the fry stuff and pour it slowly into the deep fryer. After you get it out, you cover it with so much powdered sugar that it melts into an icing-like substance. Again, gone in seconds.

And that’s when we decided to call it. We started to head out, but this was worthy of note: 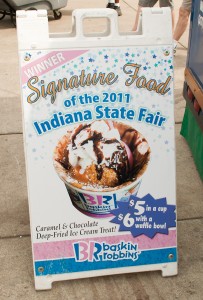 I don’t know if Baskin Robbins actually was a “winner” of anything, or if they are just claiming a title, but let me walk you through how I imagine the B&R meeting about the state fair went. Mr. big shot B&R guy says, “Hey, I know we sell ice cream, and that’s already unhealthy and full of fat and sugar. But this is the Indiana State Fair. If we show up with “just” ice cream, they’ll laugh us back to the east coast. So I say let’s take a ridiculous amount of chocolate ice cream and smoosh it together with carmel ice cream, then deep fry it, and cover it with whipped cream and chocolate. Good?”

That’s when someone else in the meeting said, “I don’t know. Maybe you better offer it in a waffle bowl in case someone wants more.”

My post on last week’s tragedy at the Indiana State Fair can be found here.