I’m getting a lot of emails, so I’m going to break it down even further.  Here’s how the ACO payments and penalties work. Let’s start with the diagrams. First up is the one-sided ACO: 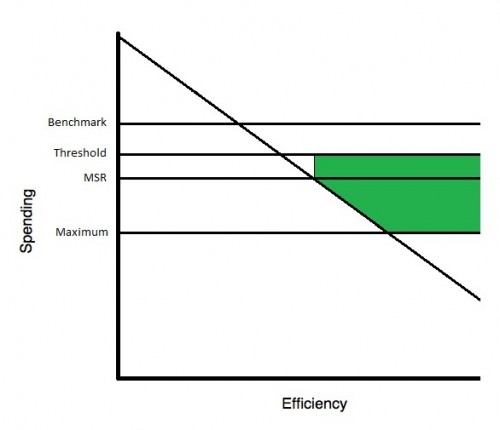 And now the two-sided ACO: 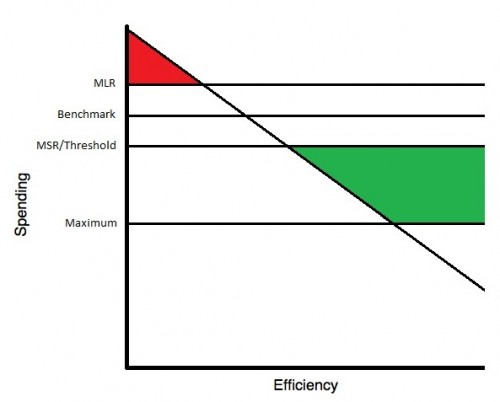 Let’s get oriented.  Spending is on the y-axis.  The diagonal line shows increasing efficiency of ACOs as you move from left to right. More efficient ACOs (further to the right) will spend less relative to their benchmark. What’s a benchmark? OK, let’s get into it.

The benchmark is what HHS says an ACO should spend. So if an ACO spends more than the benchmark, they spent too much. They’re inefficient. If they spent less than the benchmark, then they saved money. They were efficient. (This efficiency/inefficiency terminology is mine, not HHS’s. I just find it useful to think about it that way. But, an ACO could “overspend” at random too. They could have a bad year, have a lot of sicker than normal patients. Same goes for efficiency. It could be luck once in a while.)

The MLR is the Minimum Loss Rate. It is a percentage of the benchmark. If a two-sided ACO spends more than (benchmark + MLR) (or, in words, more than MLR over the benchmark), then they must pay the government back (1-sharing rate on savings) *spending above the MLR line. That’s the red. It maxes out depending on year, but even in year three, no ACO would owe more than 10% of the benchmark. One-sided ACOs never owe a penalty (which is why there’s no red on the one-sided ACO diagram). That’s the difference between a one- and two-sided ACO.