About that discretionary spending

Whenever my friends and family get riled up about the deficit (and many of them do), they like to rail against things they see in the news. Welfare being spent in strip clubs. Foreign aid. Abstinence programs. NPR. Public television. Ethanol subsidies. The NEA. All of these things fall into the wide swath of initiatives known as non-defense discretionary spending. And, to hear tell from the media, you would think that it’s consuming much of our budget.

That’s not to say that my friends aren’t often upset by spending on defense, too. Many, from both sides of the aisle, think those costs are hurting us as well.

From the CBO Director’s Blog yesterday: 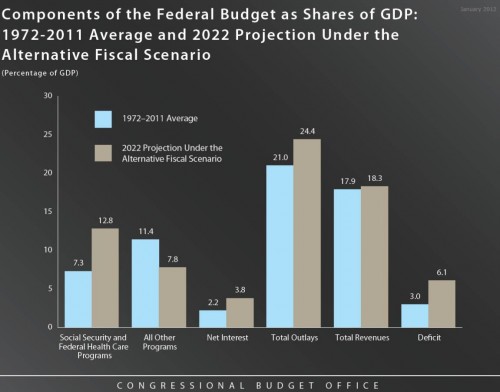 Over the last 40 years, social security and health care spending have consumed about 7.3% of GDP. The rest of the budget, including that which upsets my friends and family above, accounted for 11.4% of GDP. So it made sense to see where we could curb our spending in those areas. But look towards the future. In 2022, ten years from now, all of that other spending – including defense and non-defense discretionary spending – is going to drop to 7.8% of GDP.

Social security and health care programs, on the other hand, are projected to rise to 12.8% of GDP. That’s what’s going to get us. And the long term problem isn’t social security:

So what do we do? Today, at least among my friends and family, it seems we are content to discuss small-ball policies that will impact the actual budget in imperceptible ways. Alternatively, we can get address the real issue, which barely warranted a mention in the State of the Union or Republican Response recently: health care spending. To make the budget work, we have three real options. The first is to tax the country at much, much higher rates to be able to pay for what you see above. The second is to cost shift that burden onto individuals and get it off the government’s books. The third is to have a serious discussion on how to actually reduce the cost of care.

I’d favor the third. But if we aren’t willing as a nation to do that, we’re going to have to do one of the other two.