I was annoyed by much of the media coverage recently on the dangers of marijuana. I was contacted by Benjamin Hansen, W.E. Miner Professor of Economics, University of Oregon, who wrote this post. TIE readers are simply the best. – @aaronecarroll

Correlation is not causation.  These are the oft-repeated lines almost anyone can utter when they don’t agree with a statistic they come across.  Recently, the book “Tell Your Children: The Truth About Marijuana, Mental Illness, and Violence,” has attracted both fierce fans and foes, based on its Amazon review rating which sits at exactly 3, with an even split of 1-star and 5-star reviews. When can we trust a correlation tells us something about causation? That’s where randomization helps.  However, for many studies randomization isn’t feasible due to either financial, political, or ethical constraints.

Such is the case with marijuana and how it relates to violence in humans.  It is ILLEGAL to randomize exposure to marijuana for humans due to both marijuana’s scheduling and institutional review boards that require researchers seek to “maximize benefits while minimizing harm”.  Even if one could legally do this research, actually measuring impacts on violence might be impossible, because relatively few people commit violent crimes.  Putting this in context, there are only 4.9 murders per 100,000 people in the United States.  So even if we did a large scale randomized study of 10,000 participants with high compliance costing millions of dollars, we could never know anything about murder and weed.  Likewise, assault rates are roughly 250 per 100,000, so we’d only pick up effects on assaults if the impacts were gigantic.

All of the constraints above are why social scientists have often relied upon quasi-experimental methods.  These methods allow researchers to construct control groups to try to predict what would have happened in the absence of medical treatment, a law change, or a new policy regime. Given the recent debate surrounding “Tell Your Children: The Truth About Marijuana, Mental Illness, and Violence,” I decided to ask if the data supported the violence-marijuana hypothesis.  Using the approach of Abadie, Diamond, and Hainmuller, I predicted the best synthetic Colorado and synthetic Washington based on a weighted average of states that closely follow Colorado and Washington’s trends.  Below I plot the figures of each state relative to their synthetic counterpart.

While it is true that homicide rates went up in CO and WA more than they rose for the nation as a whole, the homicide rates in Colorado and Washington were actually below what the data predicted they would have been given the trends in homicides from 2000-2012. 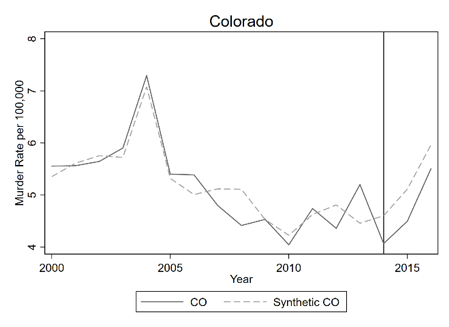 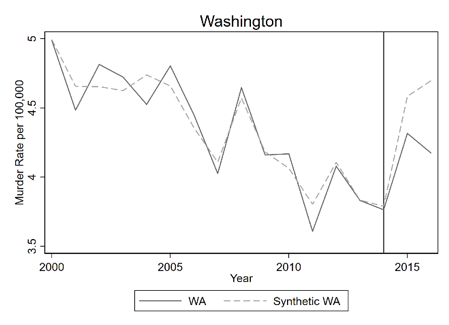 This suggests, at best, we can’t conclude that marijuana legalization increases violence, and perhaps even there could be small negative effects. You might say, naturally, “That’s fine.  But could these approaches or other related approached reasonably have picked up increases in violence if they were present?  The answer is “yes”, and they already have, but for another drug: alcohol.  Anderson, Crost, and Rees found violent crime increased in Kansas after they legalized access to alcohol statewide in 1986.  Moreover, Carpenter and Dobkin found arrests for assault jump by 11 percent when people get access to alcohol (see figure 3 from their manuscript) using arrest records from California.  We replicated these findings using similar data from Oregon.

Does this mean we shouldn’t caution our children about marijuana abuse and dependence? Of course not.  But it is also worth noting the sky isn’t falling in Colorado and Washington, at least any more than what we have predicted had they not legalized in the first place.