The puzzling role and nature of media

Sorry if this seems to have been posted multiple times. We’re having a technical problem.

Does the media influence policy? (And if so, how?) Or does the political process rule (or use) the media? What’s the appropriate role of media with respect to policy? What is “media” these days anyway? Should it be the arbiter of facts? I wrote these questions and most of the post below before today’s brouhaha over Art Brisbane’s post at the New York Times (roundup here). It was my intention to mull this over for a week or two, but Brisbane’s post gives this one some urgency.

This whole “role of the media” thing is perplexing to me. I’ve spoken to and corresponded with a number of people about these questions. Many of them have sounded perfectly sensible. Then moments after listening to them or reading their ideas, I still feel like I don’t get it. I sort of get the sense that it’s not well understood or, probably more accurately, it’s just a genuinely mushy, difficult set of issues and concepts. It’s hard to say what influences what and why. It’s hard to say what an institution as multifaceted as “the media” should do. This is not physics.

That’s probably why questions like these never seem to fully resolve. How many “role of the media” panels have there been at various types of conferences over the years? I’m guessing thousands. How many columns and blog posts have there been about the media and what it does right and wrong? I’m guessing hundreds of thousands. I’ll be on such a panel next month at AcademyHealth’s National Health Policy Conference (click, scroll to bottom of page), and this is yet another post.

I am not sure I can add much. On the panel I’ll be tossing in the role of the researcher, which does add complexity but at least moves the conversation to an area of comfort for me. I’ve already blogged on researchers and the media (here, here, and here).

Still, let me attempt to make some lame stabs at the tough questions. My training has led me to a mental model focused on institutions. This is roughly captured in the following diagram, which is admittedly incomplete. 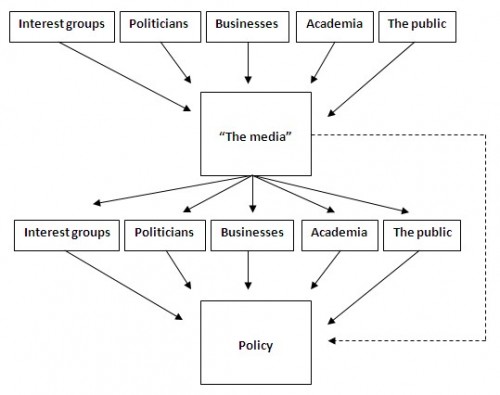 Various institutions (interest groups, politicians, businesses, academia, the public, and so on) are both sources for and consumers of media. They influence media and they are influenced by it. So, there’s a simultaneity. Causality runs both ways. These groups also influence policy. They do it outside the media and they attempt to use media to do it. Meanwhile various actors within the media are also attempting to influence policy. (Both these media-to-policy routes are captured by the dashed line in the figure.) But the media are not monolithic (hence, plural). Different actors and institutions within it are pushing on issues in different ways, with different goals. That’s why I put “the media” in quotes in the figure.

There is no question that the media influence policy and that policymakers and other people and organizations influence the media. Both things happen. In part because of all this complexity it is very hard to draw a straight, causal line from media activity X to policy detail Y, except perhaps in very rare instances. (Can you describe any for which it seems clear the media caused a particular policy change?)

What about the normative question? What ought the media do? Naturally, people will differ on this. Some might say the media should only report, not attempt to influence, as if that were possible. Others might say influencing is OK so long as it is not by deception. Point of view should be explicit. Relationships that would give rise to a conflict of interest should be disclosed, and so forth. The concept of “balance” is a frequent area of discussion. Today Art Brisbane raised the question of when and how journalists should challenge the veracity of statements by sources. This has been somewhat misinterpreted as questioning whether journalists and media organizations should tell the truth. Misinterpretation or not, it’s a very good question and a long time coming. What is the role of truth in media? When does truth trump belief? (This is not so stupid a question given the power of belief in our society if not more generally. If belief carries the day, what does that imply about truth?)

If we include social media, blogs, and the like, we have a media space that embodies a wide range of normative views, including ones that have little regard for truth. We revere truth here, though we’ve never clearly defined it beyond “evidence-based.” (I do not welcome that definitional exercise!) Other blogs and even news organizations are less truth-oriented, less evidence-based. Occasionally, even an anonymous blog can gain substantial attention. Who knows what that blogger’s ambitions and connections are? To insist on truth and disclosure in the media writ large is, well, to insist on the impossible. Fuggedaboutit. To insist that truth be a principal focus at the New York Times is, of course, reasonable but still challenging in this era of false equivalence journalism.

So, this is a very complex topic space. It is certainly puzzling to me. Have I added anything unique to the picture? I doubt it. Surely someone has written something much clearer on the subject. Any recommendations? Full credit given to pointers to brief treatments (articles, not books) written for a non-expert. I want this stuff explained to me like I’m an idiot, because in this arena, I kind of feel like one.

UPDATE: This Q&A by Jay Rosen is a good place to start.