This week I’ve talked about the Ryan “Roadmap” and the moral hazard.  Here’s why.  A number of you have written me asking to explain why I think the idea of moving the elderly to vouchers and a defined contribution system, where they might have to pay more out of pocket, is a potentially bad idea.  Great question, not only because you’re giving me the chance to steal borrow from my old blog while I get settled this week.

Many conservative wonks believe that we should head in this direction, that more cost-sharing care is a good thing.  The argument goes something like this: The elderly use too much care if it’s free.  So the more you make them pay more for it out of pocket, the less they will use.  The elderly who need the care the most will pay for it, but people who don’t need it will avoid it.  They become more efficient shoppers, spend less on needless care, and everyone wins.

Part of my disbelief comes form a paper in the New England Journal of Medicine from earlier this year.  The abstract:

Background When copayments for ambulatory care are increased, elderly patients may forgo important outpatient care, leading to increased use of hospital care.

Methods We compared longitudinal changes in the use of outpatient and inpatient care between enrollees in Medicare plans that increased copayments for ambulatory care and enrollees in matched control plans — similar plans that made no changes in these copayments. The study population included 899,060 beneficiaries enrolled in 36 Medicare plans during the period from 2001 through 2006.

Results In plans that increased copayments for ambulatory care, mean copayments nearly doubled for both primary care ($7.38 to $14.38) and specialty care ($12.66 to $22.05). In control plans, mean copayments for primary care and specialty care remained unchanged at $8.33 and $11.38, respectively. In the year after the rise in copayments, plans that increased cost sharing had 19.8 fewer annual outpatient visits per 100 enrollees (95% confidence interval [CI], 16.6 to 23.1), 2.2 additional annual hospital admissions per 100 enrollees (95% CI, 1.8 to 2.6), 13.4 more annual inpatient days per 100 enrollees (95% CI, 10.2 to 16.6), and an increase of 0.7 percentage points in the proportion of enrollees who were hospitalized (95% CI, 0.51 to 0.95), as compared with concurrent trends in control plans. These estimates were consistent among a cohort of continuously enrolled beneficiaries. The effects of increases in copayments for ambulatory care were magnified among enrollees living in areas of lower income and education and among enrollees who had hypertension, diabetes, or a history of myocardial infarction.

Conclusions Raising cost sharing for ambulatory care among elderly patients may have adverse health consequences and may increase total spending on health care.

Here’s the recap.  Some researchers wanted to see what happened to seniors if you increased their Medicare co-pays just a bit for primary care and ambulatory care visits.  After all, increasing the copay is specifically meant to drive away people who don’t need the care and lead to more efficient consuming.

Did that happen?  No. 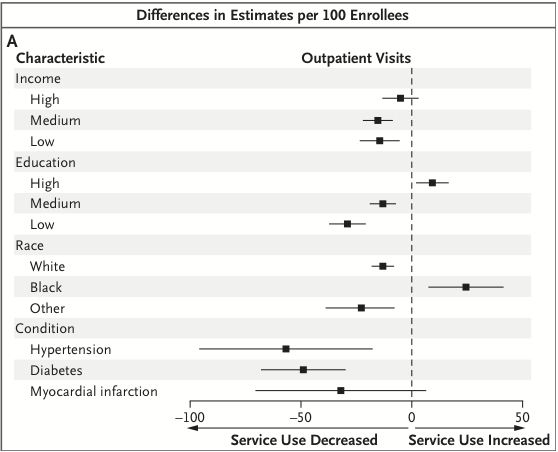 After increasing the co-pay just from $7 to $14 and $13 to $22, about 20 fewer outpatient visits occurred per 100 people.  Take a look at this graph.  Anything to the right of the dotted line is an increase in outpatient visits; a dot to the left is a decrease.  If the horizontal line crosses the dotted line, the difference isn’t significant.  Basically, people with high incomes had the same amount of visits.  People with medium or low incomes had significantly fewer visits.  Another concern is that people with hypertension and diabetes had significantly fewer visits.  That’s probably not good.

And remember, this is 20 total fewer visits for 100 people overall.  That’s a huge reduction for just a few dollars increase.  Imagine the reduction you would have seen for a significant increase, like a decreasingly valued voucher.

And that reduction wasn’t unambiguously harmless.  Here is what happened to hospitalizations after the outpatient co-payment increase: 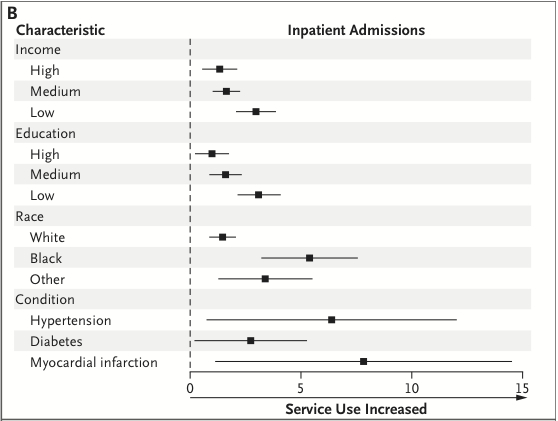 Overall, there were an additional 2 hospitalizations per 100 people and an average of more than 13 additional days in the hospital.  As you can see, all the dots are to the right of the dotted line.  That means every subgroup had increased inpatient admissions if there were higher outpatient copays.  Increased hospital admissions is a bad outcome.  Black patients were significantly more likely to have increased admissions compared to White patients.  And, as you can see, patients with chronic illnesses had significant increases in hospitalizations as well.

Let’s recap. One interpretation of the findings is that a minor additional cost-sharing for outpatient visits resulted in worse outcomes, likely increasing costs in the long run. The greatest effects were seen in those who were poor or sick.

Isn’t that exactly what we’re trying to avoid?

You will hear some people say this contradicts the findings of the RAND Health Insurance Experiment, which basically “justifies” the whole co-pay thing.  They will say that the RAND HIE showed you can increase co-pays without negative health consequences.  But that’s because many have misinterpreted the results.  As I argued yesterday about the HIE:

[H]ere’s the gist of that they found: People in the high deductible plans – those most exposed to health care costs – did spend significantly less and consumed less health care.  And, yes, much of that care was unnecessary, as healthy people did not suffer negative consequences  from forgoing care.  BUT, and this is important, poorer participants with hypertension avoided necessary care, and saw their mortality rates rise significantly.

Removing the moral hazard did no harm in the majority of patients (which is touted often as the result of the study) because they were healthy.  And, of course, getting less care when you’re healthy leads to few short term negative results.  But for those who were unhealthy, who comprised a minority of patients in the study, removing the moral hazard led to significant and dangerous consequences.

This study in the NEJM was of elderly people, who were all excluded from the RAND HIE.  They were inherently sicker.  And the results of the RAND HIE for sicker people held.  They fare poorly.  And it might not even save money.

I know it feels like higher co-pays for Medicare recipients are a good thing.  It seems right to ask the elderly to have more skin in the game.  It should be fairer and more likely to reduce waste.  But that’s only true for really healthy people.  And they’re not who the health care system is really for.

Later: As the NEJM study’s authors acknowledge, the methods cannot completely rule out alternative hypotheses, e.g. that co-payments were increased because inpatient care was on the rise. That is, the plans’ selection may play a role in the results. Only stronger methods could disambiguate this hypothesis from the one described above and found in other work, that increasing cost sharing for more vulnerable populations leads to reductions in necessary care and worse outcomes.