UPDATED: Is it time to rethink the antibiotic prophylaxis guidelines?

Not too long ago, antibiotic prophylaxis would be given before various procedures, like going to the dentist to people at risk for infective endocarditis. This applied to people at both high and low risk. Full disclosure, I’m one of the people at low risk, and I used to have to take antibiotics before such things, and I had to take azithromycin (which hurts my belly) cause I’m allergic to penicillin, and it sucked. Sorry – had to vent. So, anyway, I was pleased when research changed the guideline for people at low risk, and I could stop taking the drug.

And then Brad Flansbaum sent me this. “Incidence of infective endocarditis in England, 2000—13: a secular trend, interrupted time-series analysis“:

They basically looked at all of England to see what’s been happening with infective endocarditis since 2004. NCE guidelines were put in place in 2008 to stop using antibiotic prophylaxis. Now, they stopped it for everyone, even those at high risk.

The guidelines worked as intended. Prescriptions fell from an average of almost 11,000 per month before the change to just over 2200 a month after. But, starting with the change, the number of cases of infective endocarditis started going up. Not by huge numbers, but by March, 2013, they had 35 more cases of infective endocarditis than would have been predicted by secular trends alone. What has me really concerned is that cases increased both for those at high and low risk: 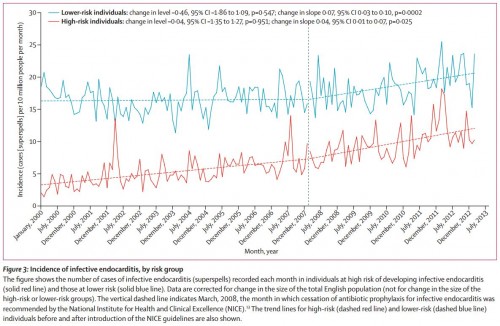 This isn’t causality, and it’s not time to panic. But it’s worth looking at in other places. Did we make the right call in ending this practice? The NICE is reviewing its guidelines.

UPDATE #1: Ok, why is the incidence of endocarditis so much higher in the low risk population than in the high risk population? Both before and after guideline changes? That’s crazy. I emailed the author to ask about it, and I will post the answer when I get it.

UPDATE #2: Dr. Martin Thornhill, one of the authors of the paper, responds to my question. Here is his answer (with permission):

If I’m understanding this correctly, the reason that the rate of endocarditis is lower in high risk individuals may be because they are still getting prophylaxis. The question at the end of my original post still holds, except now I’d like to ask it a little louder!