Hospital readmissions are down, but are they appropriately measured?

The Department of Health and Human Services (HHS) released some news that suggests patients are receiving better care from hospitals:*

The data in this report shows a substantial nine percent decrease in harms experienced by patients in hospitals in 2012 compared to the 2010 baseline, and an eight percent decrease in Medicare Fee-for-Service (FFS) 30-day readmissions. National reductions in adverse drug events, falls, infections and other forms of harm are estimated to have prevented nearly 15,000 deaths in hospitals, and saved $4.1 billion in costs, and prevented 560,000 patient harms in 2011 and 2012. 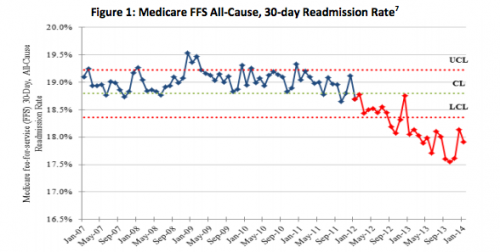 You can read more about this by Jordan Rau.

Among the remaining issues pertaining to hospital readmissions are the extent to which they should be adjusted for sociodemographic factors. The National Quality Forum recently wrestled with this. New research by two sets of investigators and published in Health Affairs adds to the debate. Some key passages follow.

[W]e compared results for hospitals in Missouri under two types of models. The first type of model is currently used by the Centers for Medicare and Medicaid Services for public reporting of condition-specific hospital readmission rates of Medicare patients. The second type of model is an “enriched” version of the first type of model with census tract–level socioeconomic data, such as poverty rate, educational attainment, and housing vacancy rate. We found that the inclusion of these factors had a pronounced effect on calculated hospital readmission rates for patients admitted with acute myocardial infarction, heart failure, and pneumonia. Specifically, the models including socioeconomic data narrowed the range of observed variation in readmission rates for the above conditions, in percentage points, from 6.5 to 1.8, 14.0 to 7.4, and 7.4 to 3.7, respectively. […]

These findings have led to some controversy and a great deal of public debate on whether the readmissions measures used by CMS to penalize hospitals should control for socioeconomic factors. On one side of the debate are supporters of the existing policy to exclude socioeconomic factors from risk-adjustment models in order to maintain the visibility of differences in health outcomes for groups with different socioeconomic characteristics. The opposing argument supports controlling for socioeconomic factors to avoid disproportionately penalizing hospitals that care for a large number of patients from disadvantaged backgrounds and communities. The question underlying the debate is centered on whether the quality of care received in the hospital can influence the portion of the patient’s risk of readmission that is attributable to his or her socioeconomic circumstances.

Patients living in high-poverty neighborhoods were 24 percent more likely than others to be readmitted, after demographic characteristics and clinical conditions were adjusted for. Married patients were at significantly reduced risk of readmission, which suggests that they had more social support than unmarried patients. These and previous findings that document socioeconomic disparities in readmission raise the question of whether CMS’s readmission measures and associated financial penalties should be adjusted for the effects of factors beyond hospital influence at the individual or neighborhood level, such as poverty and lack of social support. […]

However, some stakeholder groups and scholars have expressed concern that the current CMS policy would disproportionately affect hospitals that provide care to patients of low socioeconomic status. They argue that the policy assumes that readmissions are a result of poor quality care, but instead readmissions are driven largely by patients’ circumstances after discharge, such as lack of social support at home or in the community, and are therefore outside the control of hospitals.

Also, Hu, Gonsahn, and Nerenz demonstrate exceptional taste and brilliance** in their references, with two citations to this blog and one to Brad Flansbaum’s: 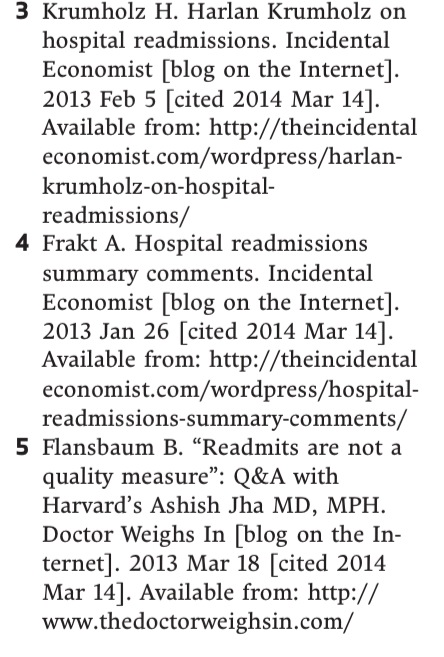 ** Words deliberately chosen to reflect an actual or appearance of bias.