Does the ACA deserve the credit (or blame) for rising deductibles?

Some critics ascribe almost anything that happens in the health care sector to the ACA. (Sam Baker wrote about this phenomenon in December.) False accusations of a government takeover of the health system lead opponents to impute a much more sweeping influence to the law than it actually has.

Last week, in a review of Zeke Emanuel’s new book, the author David Goldhill made a surprising claim: “The rapid spread of high-deductible insurance among employers and on the exchanges” was “one of the immediate unanticipated consequences of the ACA.”

In fact, high-deductible plans, sometimes known as HDHPs, have been on the rise for some time now. This isn’t to say that the ACA won’t be responsible for increasing the size of some deductibles. But attributing a “rapid spread” of high-deductible plans to the ACA misses two points: one, that rising health care costs fostered a market trend of shifting responsibility onto employees, and two, that HDHP plans actually owe their initial diffusion to legislation passed by a GOP-controlled Congress.

For roughly a decade, rising costs have led employers to trim away at the benefits offered to their workers. Writing in 2004, Paul Starr explained the pressure thusly: “employers and insurers are facing the current surge in costs without much hope that they can contain it with measures aimed at doctors and hospitals.” So they turned to the consumer instead.

As you can see in the below graph from KFF, the average deductible grew rapidly since 2006, a pattern clearly predating the ACA. In fact the biggest proportional increase seen here occurred between 2007 and 2009. 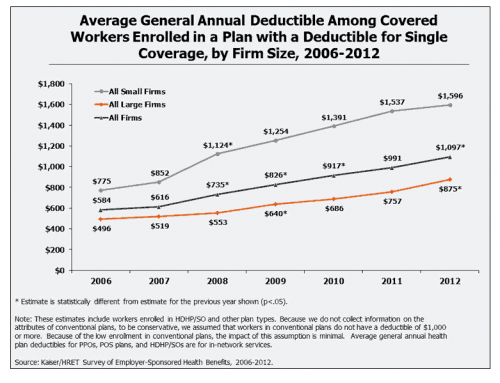 Not only has the average deductible grown over the past eight years, more and more firms are imposing them on workers in the first place, as we can see in the second graph below. Notably, the biggest year-to-year increases happened before 2010. 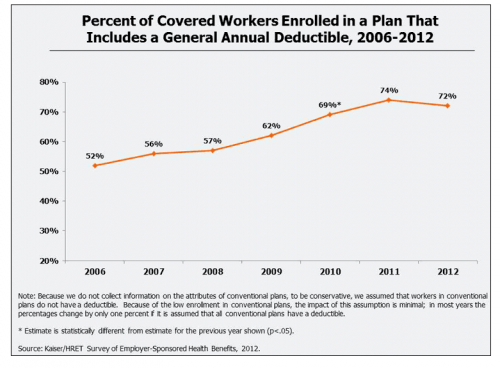 In the 1990s, some conservatives gravitated to a health insurance scheme that shifted costs and responsibility onto workers. They called this consumer-directed health care (CDHC), although the real beneficiaries were employers.

Seven years later, he wrote, “Congress, still under GOP control, passed legislation making health accounts more widely available. Many companies have since latched on to high-deductible plans as a way to keep premiums under control.”

The following year, Gail Shearer of the non-profit Consumers Union delivered prescient testimony: “The year 2003 may well go down in health care history as the year that the health care system began to rapidly evolve toward a system characterized by health insurance deductibles in the range of $1,500 to $2,000 for individuals.”

HDHPs began to grow in popularity, appealing especially to the healthy and the wealthy. Each year the IRS sets standards for HDHPs, with the 2014 threshold at $1250 for individual deductibles. Beginning in 2007, the National Center for Health Statistics began tracking enrollment in this kind of plan. Taken from the most recent report, the below graph shows trends over time among all privately-insured individuals (including employer-sponsored insurance but also extending beyond it). 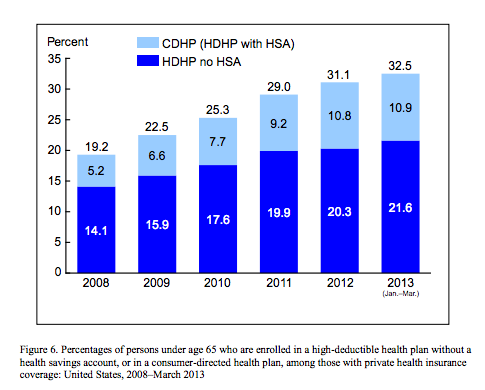 In 2007, not shown on the graph, 17.5 percent of all privately-insured people under age 65 had a HDHP. The 2010 survey ran through March, the same month that the president signed ACA into law. Thus everything on the graph before 2011 represents pre-ACA data. From 2007 to 2010, the number increased by 7.8 percentage points. Since that time, it has increased by only 7.2 percentage points.

Not only was the trend not caused by the ACA, the pace has apparently slowed slightly since the law came into existence.

The ACA alters incentives and business models in many areas of health insurance and health care. Sometimes it is deserving of credit or criticism. But in order to have a fair debate about either, we need to keep history in mind.