Come back to Texas

Let’s start with the Medicare population (I’m turning their data into charts for easier consumption): 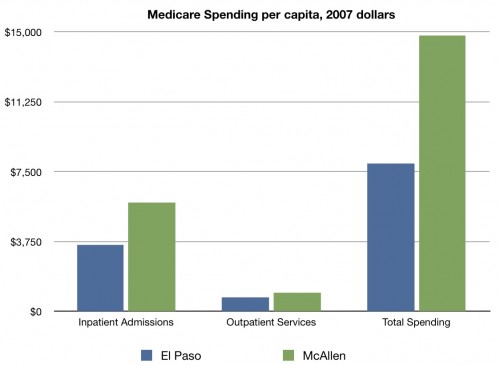 Well, that’s pretty much what Gawande reported.  Medicare spending per person was way higher in McAllen than El Paso.  So far, no surprises.

The data on BCBS, however, is not what you’d expect: 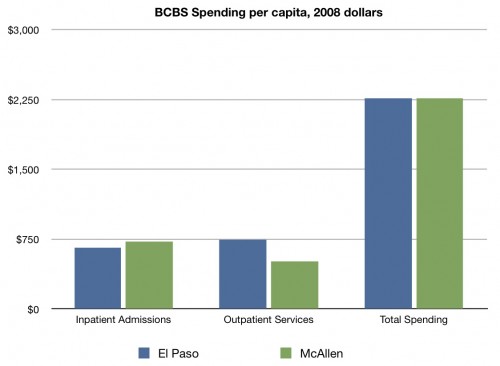 Inpatient spending for McAllen was nowhere near as high, compared to El Paso, as it was for Medicare.  Outpatient care spending was less.  And overall spending was also slightly lower per person in McAllen than in El Paso.

We have demonstrated that the sharp differences in the use of Medicare services between El Paso and McAllen, Texas, were not generally found in the population of Blue Cross and Blue Shield enrollees under age sixty-five in Hidalgo County (McAllen) and El Paso County. We considered several explanations for these patterns, including differences in prices, health, incomes, and other factors. Ultimately, we hypothesize that some part of the puzzle may be explained by private insurance companies and Medicare exhibiting very different interactions with local health care providers.

I think there may be something to this.  I’ve always argued that the problem Gawande uncovered in Texas was a provider problem.  Doctors and hospitals are caring for patients in a more expensive way.  In fact, I’ve argued many times that the largest segment of health system over-spending in the US is for actual care.  So this should come as no surprise.  The authors believe that private insurers are more capable of making it more difficult for doctors to practice this more expensive type of medicine.  That may be the case.

I don’t think they are as good as some will think, however.  Here’s one last chart I made from their manuscript data: 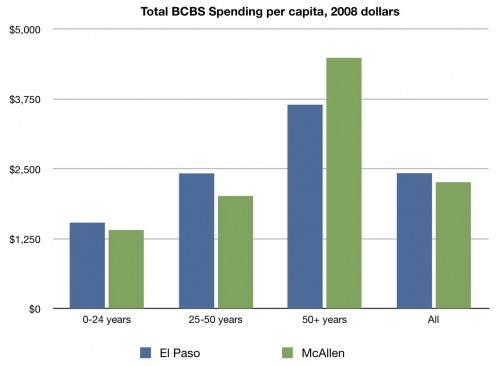 This is BCBS spending per person broken out by age.  Yes, private insurance is better at holding down spending for young people, and middle age people.  But, once we hit the crowd 50 and above (really 50-65, when Medicare takes over), spending in McAllen takes off.

What we may be seeing here is that pediatricians in the two areas aren’t that different.  Maybe GPs and Ob/Gyns caring for people in their next 25 years aren’t that different.  But – and this is critical – maybe those caring for the elderly, especially proceduralists and inpatient specialists, practice very differently.  That would account for the differences, and would affect Medicare more than private insurance.

The authors take their results and say that maybe the same providers respond differently to private insurers than to Medicare.  I think it may be that the more expensive providers spend more time dealing with Medicare than private insurance.

Regardless, providers are the problem, and we need to figure out how we can make them practice more cost-effectively.

UPDATE: I got a very nice email from one of the study authors.  You can read his blogged thoughts on the study here.