Excess sodium intake correlates positively with high blood pressure. Blood pressure varies by region, but whether sodium content of foods sold varies across regions is unknown. We combined nutrition and sales data from 2009 to assess the regional variation of sodium in packaged food products sold in 3 of the 9 US census divisions. Although sodium density and concentration differed little by region, fewer than half of selected food products met Food and Drug Administration sodium-per-serving conditions for labeling as “healthy.” Regional differences in hypertension were not reflected in differences in the sodium content of packaged foods from grocery stores.

I feel like I’m spitting into the wind with salt, but I just can’t help myself. Here’s the second sentence of the paper:

More than 90% of US adults consume more sodium than recommended.

Remember that CDC data shows that Americans consume, on average, 3500 mg of sodium a day. Remember this study, which showed that consuming 3000 – 6000 mg of sodium a day was associated with lower rates of death that consuming more or less. Remember this Upshot piece which summarized the evidence. Or watch the below Healthcare Triage. Then, try and square that with a bold statement that 90% of us need to consume less salt.

Anyway, the study found that 50% or more of some categories of foods had a lot of sodium. It should come as no surprise that these included cold cuts, soups, pizza, and processed meat and pasta dishes. But there are a few caveats here. Almost no breads, cheeses, savory snacks, or poultry had much sodium at all. And there are lots of other things we buy (ie fruits, vegetables, meats) that aren’t necessarily high in sodium either. So if you balance foods which are high in sodium with foods that are low in sodium, you get… something which might approximate the right amount of sodium.

Plus, anytime I see a headline like this, from the AMA, in my inbox this morning:

CDC: More than half of food Americans buy contains more than recommended amount of salt.

My first thought is: hmmm… more than half of food Americans buy contains less than the recommended amount of salt. Look, I agree that we could likely benefit from shifting away from processed foods to more unprocessed ones. But these scare tactics just don’t seem to work. At least, not to me.

Further, what are those recommendations? Back to the CDC:

Americans consume an average of 3,500 milligrams (mg) of sodium each day (excluding salt added at the table). But the Dietary Guidelines for Americans, 2010[PDF-2.9M] recommend limiting sodium to less than 2,300 mg a day. About 6 in 10 adults should further limit sodium to 1,500 mg a day. Increasing access to lower sodium food options and giving the power of choice back to the consumer could help prevent millions of cases of high blood pressure and save billions of health care dollars.

Remember that those with a salt intake less than 3000 mg had a higher risk of death or cardiovascular events than people who consumed 3000 – 6000 mg. Chart! 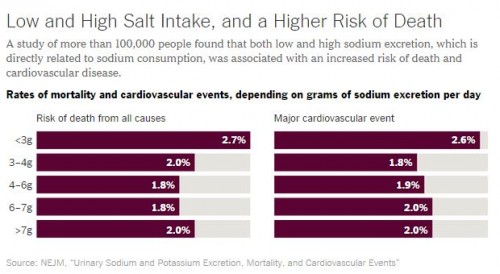 I’ve already argued that these recommendations may be going too far. I wish more people would acknowledge these points or convince me that I’m wrong.