Last December, PolitiFact.com selected “a government takeover of healthcare” as the Lie of the Year for 2010.  Their reasoning was that, despite the claims of numerous candidates and pundits, the ACA will mostly build on the existing employer-based insurance system.

I agree with PolitiFact about the rhetoric, but several months ago I started to wonder how each provision of ACA would affect the balance between public and private insurance in the long run.  In particular, the “Cadillac” tax, a 40% excise tax levied on high-premium health plans, seems likely to erode the favorable tax treatment of employer-based insurance over time.  This is because the premium threshold where the tax begins to bite is indexed to inflation, but health insurance premiums have historically grown substantially faster.  If employer-based coverage becomes less attractive, how many more people will choose public coverage? 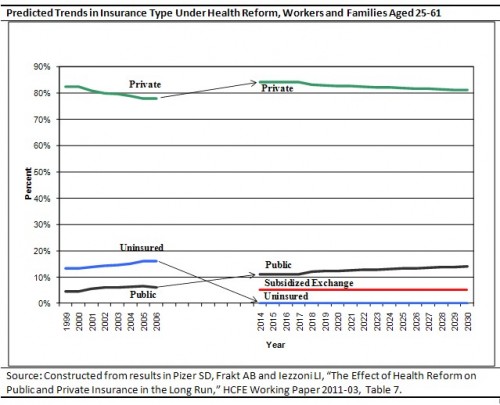 Answers to these questions can be found in my new working paper (also available here), co-authored with Austin and Lisa Iezzoni.  We used recent data from the Medical Expenditure Panel Survey and carefully followed published methods for studying the effects of Medicaid expansions and variations in tax rates on public and private insurance coverage for workers and their families (see the paper for details and references).

The bottom line is illustrated in the chart above.  The Medicaid expansion and individual mandate will lead to growth in both public insurance and private insurance in 2014.  In 2018 the excise tax will be implemented, and we assume that it affects a growing share of the workforce as the thresholds erode over the next 12 years.  By 2030 the effect of the tax is to shift about 3% of workers and their families from private coverage to public coverage.  Total private coverage remains at about 80%, the same as before reform, but public coverage grows from 6% now to 14% in 2030, which is a 233% increase.1 In addition, 5% will enroll in subsidized private coverage through exchanges.

Is this a problem?  Others may disagree, but we have no philosophical objection to more public insurance, provided we can afford it.  So can we afford it?  At this point, we don’t know.  As far as we can tell the official projections from the CBO and the CMS Office of the Actuary (OACT) do not account for this tax-induced shift from private to public insurance.  On the other hand, the shift will occur because of the excise tax, which could generate a lot of revenue.  Furthermore, the excise tax could induce firms to shift compensation from health benefits to wages, increasing income tax revenues.  We’d be very interested to hear from the official scorekeepers (CBO and OACT) what they think the budgetary implications are.

1 These figures do not match other published predictions because the study was conducted using a sample of workers and their families aged 25-61 and featured some other sample restrictions.