Julie Rovner’s quotes of Michael Cannon about Rep. Ryan’s plan for Medicare got me thinking.

For example, Michael Cannon of the libertarian Cato Institute says having people spend their own money, rather than the government’s, helps.

“They’ll be cost-conscious consumers, they’ll choose economical health plans, they’ll put downward pressure on prices, because they will get to see the savings,” he says.

At the same time, Cannon adds, more competition within the health care industry will also help hold down prices.

“Because in order to capture the business of those cost-conscious consumers, health plans, providers, will have to find ways cut costs while improving quality,” he says.

There’s something to this, at least in theory. And yet, as I heard these words I wondered if we had any evidence on hand about the relationship between lower premium subsidies and health care cost inflation. Indeed we do! Premiums in the commercial market are subsidized by the government at a lower rate than those in Medicare.

Take employer-sponsored plans. They receive the equivalent of nearly a 40% tax subsidy, on average. Contrast that with Medicare, which covers about three-quarters of the premiums for Part’s B and D and the entirety of what would otherwise be a Part A premium. That is, even participants in the most government-subsidized part of the commercial market receive a much lower subsidy than do Medicare beneficiaries. Participants in the non-group market get even lower subsidies.

With that lower subsidization in the commercial market, we might expect — based on theory alone — more cost consciousness and a lower rate of increase in health care costs. Is that what we find? Not according the figures from the Kaiser Family Foundation: 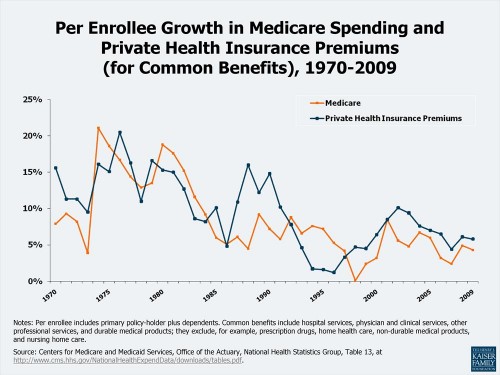 That’s 40 years of pretty similar growth for private plans and Medicare. With data like this, I think we need to reexamine some of our theories about what lower premium subsidies can do.

Addendum: There is a counter-argument to what I just presented. I’m not convinced it is a good one even though I agree that the consequences of it would be beneficial. It’ll probably come up in the comments so I won’t spoil it for those who want to play along.