Will anyone benefit from the removal of the individual mandate?

First of all, I had planned to post earlier, but I’ve been having my life saved by Austin’s post on Dustin Luck’s script to fix Google Reader. I still want my old colors back, but it’s totally usable again, and I’m feeling so much better. I haven’t been this ticked off by a stupid product change since New Coke.

Anyway, what I really wanted to talk about was a piece by Jennifer Haberkorn on the Supreme Court’s potential rulings on the ACA. She suggests that if the court throws out the mandate, but keeps the rest of the law, this could be good for health care reform:

If the Supreme Court next year gets rid of the health reform law’s requirement to buy insurance, Republicans could gain momentum to get rid of the rest of the law — and President Barack Obama would suffer a huge embarrassment at the height of an election year.

But Democrats and supporters of the law also see a silver lining: If the least popular part of the law goes away, they think what’s left could become stronger and more popular with the public…

some strategists who support the law say it could be a new opportunity for health reform — despite the embarrassment of such a high-profile loss — because what’s left of the law would have much stronger public support. A March poll by the Henry J. Kaiser Family Foundation found that 67 percent of people want to repeal the provision. Only 27 percent favored keeping it.

One of the reasons I hate polling on issues like these is that they are influenced by so many other decisions. Read the piece. You’ll see any number of interpretations of the numbers to fit someone’s agenda.

Here’s what I think. Support for the law likely closely tracks support for a political party. I think that the individual mandate has become the focus of attack because it’s unpopular and doesn’t benefit people directly. But if it goes, I think then we will start hearing about how bad the regulations in the ACA are, or how it is a government takeover of health care, or DEATH PANELS!

I have yet to see any convincing data that show there’s a significant portion of America that loves the ACA, but hates the mandate. I see no politicians running on a platform of removing the mandate, but leaving the rest of the law intact. I see no reason to believe that dropping the mandate will do anything to increase support for the President, the Democrats, or the ACA.

But that’s besides the point. The politics are silly. What matters is what will happen to actual people. 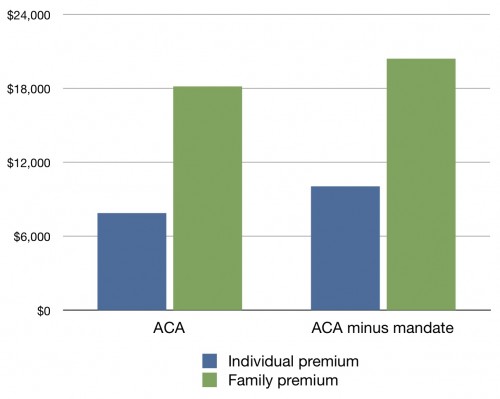 Your insurance premiums will go up. Significantly. In fact, the average premium will be over 25% higher by the end of the decade than if we leave the law alone.*

Here’s what happens to coverage: 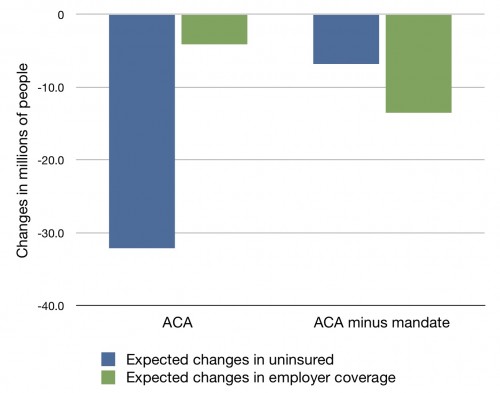 The ACA is projected to reduce the number of uninsured by more than 32 million; take away the mandate, and that number drops to less than 7 million. But here’s where it gets even worse. The ACA strengthens the private insurance market, so that the number of people with employer coverage is expected to drop by only about 4 million. Take away the mandate (which protects private insurers) and the number of people with employer based coverage drops by more than 13 million.

If the individual mandate goes, more healthy people will opt out of buying insurance in the exchanges. The likely result will be an increase in premiums, and a subsequent increase in subsidies required to make them “affordable”, which will drive up the long term projections of the price of the law. If the premiums go up too fast, the market could fail.

This could all be fixed by other means, but I don’t see Congress taking action to do so. After all, support for mandate wasn’t always so rare.

Regardless, I still wish we could see more stories detailing to the public what decisions like this will mean to actual Americans instead of to the few hundred people running for office.