Why the US spends more on health care

The figure below is from a National Institute for Health Care Management Expert Voices article by Eric Jensen and Lenny Mendonca of McKinsey & Company. If you can’t make out the fine print, click to see an enlarged version. It’s worth some careful scrutiny. Anything jump out at you? 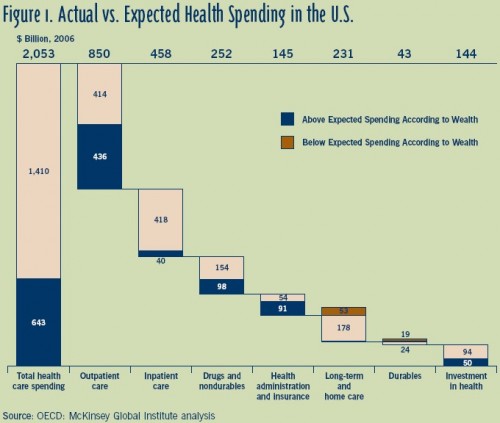 At first I was amazed to see that outpatient care represents such a large portion of total spending (41%) and a huge fraction of spending above what would be expected given the nation’s wealth (68%). By comparison, inpatient care is a meager 22% of total spending. Wow! Perhaps hospitals are not to blame for the vast majority of health spending after all. But something didn’t make sense …

Don’t be fooled. “Outpatient” doesn’t mean “non-hospital” and “inpatient” doesn’t represent all that occurs in a hospital. A whole lot of stuff is happening in hospitals. In fact, the Jenson/Mendonca article tells us that one of “[t]he two largest categories of outpatient spending [is] same-day hospital care.”

The report upon which the Jenson/Mendonca article is based has a nice figure that illustrates this: 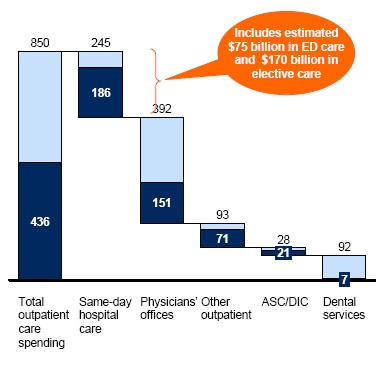 Yes, a lot is going on in hospitals. But physicians offices are also a major source of excess spending. (By the way, that report and the accompanying figures are loaded with interesting descriptive analysis.)

The article goes on to tell us why outpatient care costs so much. It’s not the volume of visits. It’s per visit costs.

Per visit cost shave been surging due to more care being delivered in each visit, a shift toward more complex and expensive procedures including CT and MRI scans, and absolute price increases for equivalent procedures. A marked shift in visits from general practitioners to specialists is also likely playing a role in boosting costs.

Fee-for-service payment arrangements, which predominate the health care industry, are one of the major factors driving the increased service intensity.

So, it may still be fair to call hospitals the 800 pound gorilla. But a more nuanced view is that it is outpatient care, much of it in hospital settings, that is the real cost issue. However, since outpatient care is both highly profitable and relatively easy to peal away from hospitals, the future of cost control may not be justifiably focused on hospitals.