This is a “Best of Rational Arguments” post.  It originally appeared on August 8, 2010.*

For people who don’t live in places like this, there is simply no way to explain the Indiana State Fair.  There is a whole thing with animals and showing them.  I don’t understand any of it.  Truly, I can’t tell the difference between the pig that wins first place and the one who goes home empty handed.  There are rides, but I don’t trust any of them.  There are shows, but I don’t really care for anyone performing there.  So why do we go?

You can turn on Top Chef or any show on the Food Network and hear about chefs on the “cutting edge”.  They may be deconstructing old favorites, or using molecular gastronomy, or fusing two cuisines.  They have NOTHING on the artists at the state fair.

State fair food people do things that no one in the real world would dare.  They push the limits, to the point that I no longer know where this will end.

I warn you.  The rest of this post is not for the faint of heart.

My wife grew up in Milwaukee.  She will occasionally talk of food that she loved at their state fair when she was a child.  Because of this, we always manage to nab one of these (her favorites): 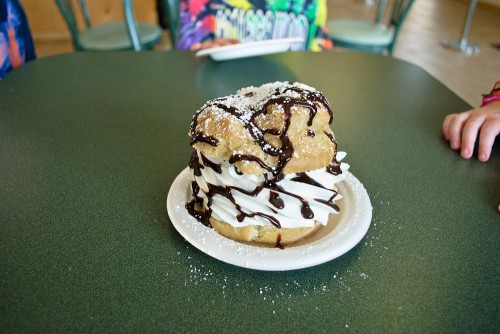 That is a chocolate cream puff. We once got one that I swear weighed 6 pounds.  My crack team of eaters – 5 of us – put this down in less than a minute.  We’re veterans of the state fair.  Cream puffs are for, well, cream puffs.  This is a warm up.

After all that sweet, you gotta have some salty.  Luckily, this was right across the way: 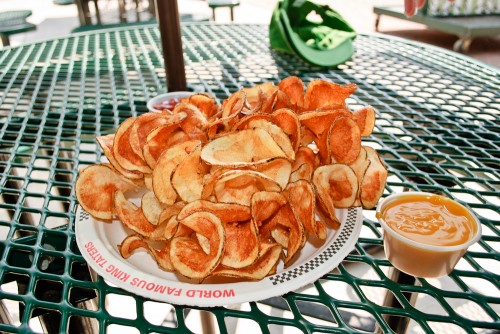 Get this.  The geniuses at the state fair have invented this gizmo where they can take a whole spud, and just by spinning it, they can turn it into one long mobius-strip of potato.  Then they drop it in a deep fat fryer until it’s absolutely deadly. It’s like a potato chip, only not as good for you.  They serve it with a cheese-like sauce and all the ketchup you can carry.  It’s too big for the plate.  This might have taken us 2 minutes to polish off.

Just so you know, I took a Pepcid before we left.

Some of you are thinking I’ve overplayed my hand right now.  After all, these aren’t really that bad.  Sure, they’re unhealthy, but not really interesting.  I laugh at your naivete.  Because here is where the fun begins.  Here is where the Indiana State Fair blows your mind.

Back in 2003, before I left for the fair, everyone would ask one question.  Are you going to eat this: 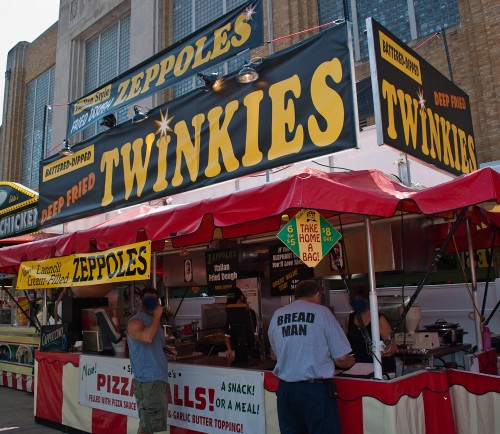 Of course I was.  Back in ’03, the cutting edge of state fair food was the deep-fried Twinkie.  Why, you ask?  Because a regular Twinkie is for health nuts.  They take a Twinkie, dip it in batter, and then drop it in the deep fryer.  When you eat it, it’s like a funnel cake wrapped around regular cake wrapped around sugar.  See the sign above “Bread Man”?  That sign is letting you know that you can take home a bag.

Although my oldest son and I tried this back at that first fair, we passed on it in subsequent years.  Not because it was terrible, although it sorta was, but because every year for the next 5 years, they found something else to deep fry: 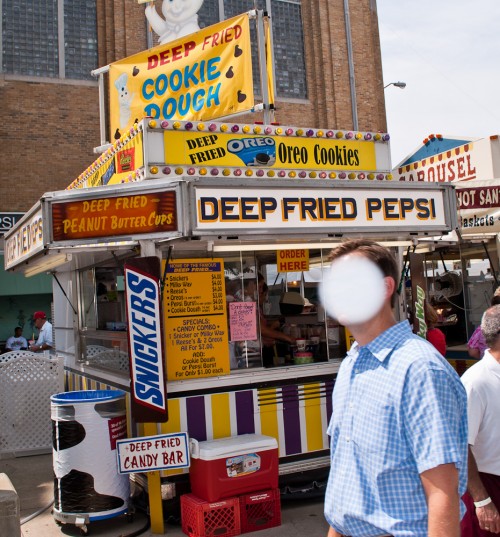 Behold the wonder of the deep fried candy station.  This beauty appeared at the second state fair I attended in 2004.  That year, I partook of a deep fried Oreo.  Sure, Oreos are good and all.  But…  it’s deep fried!  Dipped in batter, dropped in the fryer, and then covered in powdered sugar.  Much better than the Twinkie.  But they weren’t done there.  In 2005, they added the deep fried Snickers.  Push a stick into the Snickers, drench it in batter, fry it, and powder it with sugar.  The master stroke of this one is that the Snickers melts inside the batter, so when you bite it, you get to scald your mouth with molten Snickers. Mmmmmmmm.

Over the next few years, they added deep fried Reeses Peanut Butter Cups, deep fried cookie dough, deep fried Milky Ways, and deep fried Pepsi.  From what I hear, they inject some dough with Pepsi and give it the usual routine.

If you look at the yellow sign, they have the “Special Candy Combo”.  That’s what true gourmets like us get.  One deep fried Snickers, one deep fried Reeses, and two deep fried Oreos.  We take this basket of goodness behind the cart, outside the Cattle barn, and (ignoring the manure smell) my children gather around like baby birds awaiting a worm.  After sampling each of these, my wife and I lower the sticks in each of the treats into our childrens’ mouths so they can take a bite.  We go around in circles until the “food” is all gone.  I have no fear of spreading germs.  No germs could live on this stuff.

We satisfied ourselves on deep fried candy and such until 2009.  But the state fair people were obviously anything but satisfied.  In 2009, they rolled out this baby: 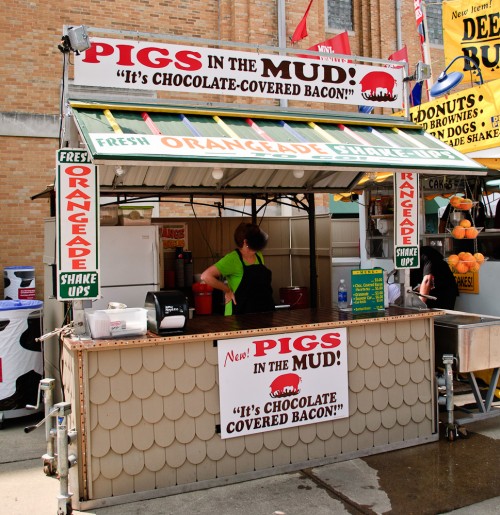 That’s not a Photoshopped fake.  It’s chocolate covered bacon.  My wife, who is usually a sport, tapped out here.  Not my kids, though.  Nothing could stop them.  We stepped up and placed an order.  When the chef collected our bacon from the vat of chocolate, she asked if we wanted powdered sugar on it.  I was temporarily frozen.  After all, I had no idea how true connoisseurs ate their “Pigs in the Mud”.  We opted for the sugar.

The bacon was soggy.  It was disappointing.  Not terrible tasting, but better in concept than in execution.

That brings us to 2010.  A few weeks ago, the whispering began.  How could they top chocolate covered bacon?  I read a few posts from people attending other state fairs which confirmed for me that Indiana was ahead of its time.  Our maestros could not let us down.  They would have to once again prove their mettle. 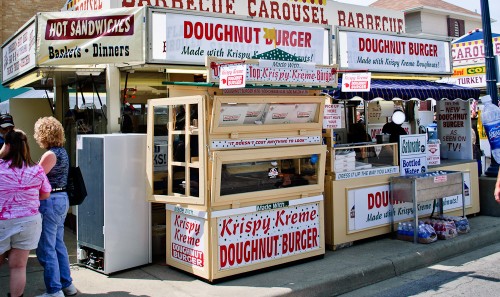 The “Doughnut Burger”.  Words failed me.  What insane mastermind looked at a burger and thought, “You know what this is missing? Glazed Krispy Kremes.”  And that’s what they did.  You may not be able to see it, but you can get your doughnut burger with cheese and/or bacon.  Don’t believe me?  Here’s a close-up: 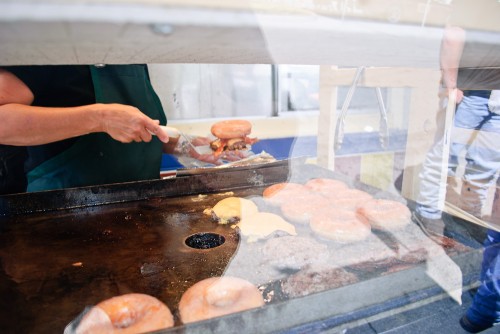 Where do I start?  The doughnuts are on the grill.  They take one of the grilled doughnuts, and put a burger right on top of it.  Everyone seemed to be adding cheese and bacon.  And then they top it off with another doughnut.  It’s like someone thought the Double Down was too healthy.

I’m a pretty adventurous eater.  If I’m in a restaurant, and there’s something funky or odd on the menu, I will order it.  But this…  this was too much.  I couldn’t do it.  Even my kids didn’t fight my decision.

You would be shocked how many of these I saw sold, though.

Where will it end?  I am almost afraid for 2011.  At some point, they will go too far.  I fear that Hoosiers won’t be able to turn back before it’s too late.  Partly, that’s because right next to the doughnut burgers, they were selling this: 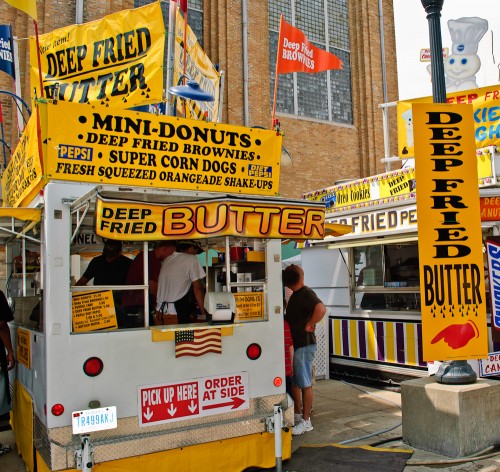 Isn’t that one of the signs of the apocalypse?

*We have a fair number of new readers recently, and many of you may not have been readers of my old blog.  Therefore, I will be re-posting some of my favorite pieces from Rational Arguments on Sundays from time to time.  We’ll call it the “Best of Rational Arguments” (B.O.R.A.).  If they are repeats for you, I apologize.