Where do the cuts go?

Everyone seems to be talking about Rep. Ryan’s proposal, so there’s not too much to add. Combine that with a potential imminent government shutdown and a potential future debt limit crisis, and we’re not going to be done talking with this for some time. I’ve read the full proposal (it’s 30 pages), and there’s not much more detail. (UPDATE: There’s evidently a longer proposal. This shouldn’t be so hard to find.) I’m still waiting to hear how this would get us to 4% unemployment in 2015, especially since that’s likely lower than the fed would allow.

I have just one thing to point out. There are a lot of people talking about how the proposal attacks entitlement reform. But it’s not evenly spread. Right off the bat, a lot of it comes from repealing the PPACA, which Rep. Ryan judges would save $1.4 billion in spending. A lot of the law was focused on revenue, or spending cuts, and I’m not sure where those go.

Other than “Other Mandatory”, which I can’t see fully explained in the proposal, the three biggest active cuts are to Medicare, Medicaid, and non-security discretionary spending. Social security doesn’t seem to change much. But, they aren’t being cut equally.

I’ve graphed the relative amounts of these three components in 2010 spending, per Rep. Ryan’s report, as columns lining up with the left-axis. I’ve graphed his projected decade of savings versus the President’s FY2012 budget as a line corresponding to the right y-axis. 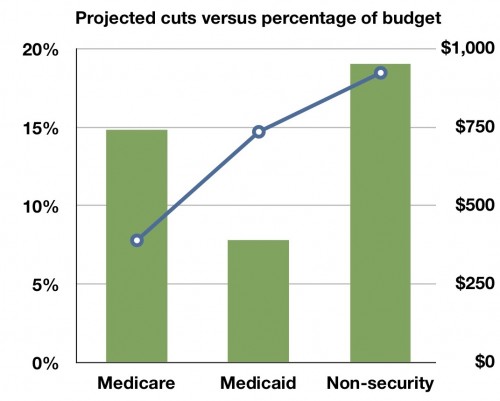 As you can see, comparatively, most of these cuts come from non-security discretionary spending. A significant amount also come from Medicaid. The fewest cuts come from Medicare. However, Medicaid comprises a much smaller percentage of the budget than these other categories. This is not an across the board percentage cut, nor is it a cut that hits all sectors of the population equally.

All entitlement reform is not equal. This proposal will hit Medicaid hardest of all.