When fiction and politics meet 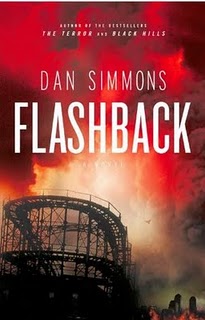 I’m a voracious reader. In a good week, I can polish off a number of books, both non-fiction and fiction. Since I was going to be on a plane for 7-8 of the last 24 hours, I was saving Flashback, by Dan Simmons.

I’m not going to spoil the plot, but if you don’t want to know anything about the book, stop reading here. You’ve been warned.

Let me start with a disclaimer. I love Dan Simmons’ books. His Hyperion series is one of my all-time favorites. I also think The Terror is a masterpiece, and Drood is amazing, too. I even liked Ilium and Olympos, and those were not for everyone. So I was very, very excited to read Flashback.

And I won’t say I was disappointed. The story was inventive, I enjoyed his usual attention to detail, and I think his pace and plotting were up to snuff. But… the politics of it bothered me most of the way through.

This is a dystopian novel, and it served its purpose of disturbing me into thinking about where the country is headed. But the bleak future of the world he describes is laid entirely at the feet of progressive politics. And I’m not just talking one aspect of progressive ideology. It’s all to blame.

The end of the world begins with President Obama’s Democratic National Convention speech in Denver. The stimulus leads to the utter collapse of our economy. Entitlements bankrupt the US. We go broke and the recession never ends.

But it doesn’t stop there. President Obama’s speech in Cairo emboldens the Muslim world into forming one huge power, billions strong. Sharia law spreads into every country. A retraction of American military might leaves us weak, and a refusal to accept American exceptionalism emboldens our enemies. Iran develops the bomb and destroys Israel, which – weakened by a lack of support from the US – doesn’t even return fire. The few refugee Jews who survive come to the US, but, because of our fear of offending the Muslim world, are kept in a “District 9” like zone and literally poisoned if they leave.

Global warming turns out to be a complete hoax, totally made up, and the economic disaster of trying to create green energy makes things worse. Diversity turns to appeasement turns to apathy. A government takeover of health care destroys our system and leaves us with decade long waiting times. Inflation is at incomprehensible levels, states are lost to Mexico and Japan, and rampant immigration destroys us from within.

Want to guess the one state where things are good? The “Republic of Texas”, which seceded and only accepts people who have valuable skills. Oh, and you can get that medical procedure you need with no wait time because, and I quote, “Down here we let you keep most of what you earn and let you pay for what you need.”

Look, I don’t need to have my fiction come in progressive-only flavors. I love Tom Clancy’s books, and I might have voted for Jack Ryan for President. I like some of Vince Flynn’s earlier stuff as well. Ender’s Game is a masterpiece, and Orson Scott Card is no leftie.

But the politics in Flashback were so utterly over the top. It seemed like every few chapters, some character had to give a speech on how the Left was responsible for every single bad thing in the US. Moreover, it seemed like the only speeches characters gave were of this sort. No debate, no argument, no disagreement.

I have no idea what Dan Simmons’ politics are. Nor do I want to care. In fact, he claims that you can’t tell his political beliefs from Flashback at all.

If that’s the case, though, then I’m forced to wonder what the point of all this was. I could handle a failure of Keynesian economics as a plot device to bring about economic ruin. But what about all the rest? Are we to believe that the world fails because every single point of the Democratic political platform is utterly wrong? And then to believe that this does not make the book political?

I ask all of this because I’m trying to work through it all myself. I want to remain open to ideas that contradict my beliefs. I want to read smart things written by people who disagree with me. This novel failed for me in that regard, however, because it seemed so forced.

I want to believe that the politics of the artist shouldn’t matter in my appreciation of his art. In this case, though, I found myself unable to.

Is it my failure? Mr. Simmons’? I don’t know. If any of you have read the book, I’d be interested in your thoughts.