What’s the lesson of the CLASS Act?

I’ve been bombarded with people asking me what we can learn from the demise of the CLASS Act. You’ve all been having that discussion on Don’s post. But I’d like to focus on what we haven’t learned.

We haven’t learned that the end of the CLASS Act means that health care reform wasn’t necessary, or was a bad idea. Let’s remember what this law was about: 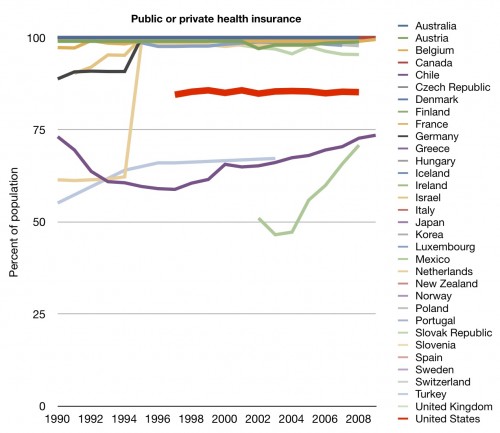 That bright red line is the percentage of Americans who are insured. As a country, we’ve pretty consistently beaten Chile, Mexico, and Turkey (although Mexico has had a good run lately). Every other OECD country trounces us.

This law is about access. It’s about reducing the number of people in the US without insurance. And, although I wish it did more, it’s still going to likely make things much better than the status quo: 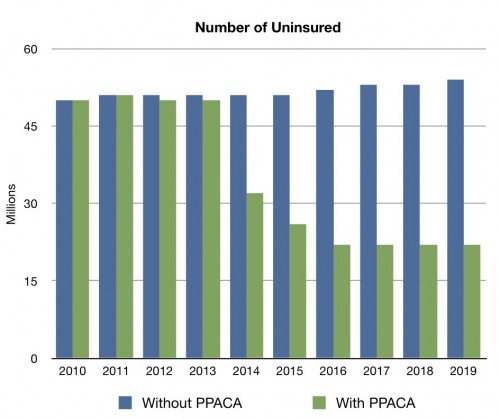 The PPACA is going to reduce the number of uninsured. I think it’s crazy we can’t get to zero, but I still think the green bars are far superior to the blue bars.

None of this has anything to do with the CLASS Act. That was about a separate issue. Yes, those who crafted the law used the CLASS Act to make the numbers look better, but I’ve always contested that that’s not what the bill was about. I, personally, think that sometimes good things cost money, and since getting more people insurance is a good thing, I’m OK with the bill. I’ve never understood the impulse to believe that we can only do things that are both  good and cost-saving.

This doesn’t mean we don’t have a budget problem. We do. But just as Medicare Part D passed as a good thing which cost money, so, too, should something which significantly reduces the number of uninsured.

The CLASS Act was flawed. So are the high-risk pools. Other things in the law may be, too; such is the nature of legislation. But that doesn’t mean that the priorities, or the major impetus of the ACA, were necessarily wrong. And those who celebrate a victory just because the other side “lost” won’t ever convince me of anything, no matter what side they are on.