What social media does for scientific and academic communities

Emily Darling and colleagues make a data-driven case for academics and scientists to engage on Twitter and use other social media, referencing other work with which I am not familiar.

Scientists are harnessing the power of social media to fundamentally speed up the pace at which they are developing and sharing knowledge, both within scientific communities and with the general public (Bik and Goldstein 2013, Ogden 2013). There is a growing diversity of “social ecosystems” that support the scientific and scholarly use of social media (Bar-Ilan et al. 2012). For example, scientists are using collaborative project spaces (Wikipedia, Google Docs, figshare, GitHub), blogs and microblogs (Research Blogging, Twitter), online content communities (YouTube, Mendeley, CiteULike, Zotero), and professional networking sites (Facebook, Academia.edu, LinkedIn, ResearchGate) to develop new ideas and collaborations that culminate in concrete scientific outputs. Bik and Goldstein (2013) provide an essential guide to how (and why) scientists should use social media.

(The PDF took a long time for me to download. So, with the authors’ permission, I’ve hosted it here. You can find all the above-cited references therein.)

The authors make some of the same points I make in my social media talk: Social media are a way to form a “virtual department,” far larger and more diverse than one can typically has at a university. It can facilitate collaboration and lead to additional publications. (In my case, my publication count is probably larger by a dozen due to relationships established and ideas explored through this blog.) And it can increase the reach and relevance of one’s work and that of one’s scholarly community. Nevertheless,

tweeting and blogging are rarely valued by hiring, tenure and promotion committees or granting agencies (Mandavelli 2011, Fox 2012), although this is starting to change (Piwowar 2013, Priem 2013).

The authors make the point that Twitter can serve as a substitute for article or blog comments, suggesting that scientists are more enthusiastic about the former than the latter. I agree this substitution can be valuable, but disagree with them about the reason some might prefer it:

We believe that it is due in large part to cost effectiveness (i.e., the recognition gained from tweeting is generally low, but so is the effort expended), and perhaps to anonymity (i.e., some scientists tweet under aliases).

In my experience, people are enthusiastic about tweeting specifically because it helps build their brand and grow their network at low effort. In contrast, online comments take longer to prepare but are hardly ever read, doing little to increase one’s reach and relevance.

The authors also point out some of the limitations and downsides to social media. For example, ideas can be misunderstood and misused when broadcast to a wider, less expert audience and in less formal and precise language.

The following infographic summarizes some of the paper’s content. 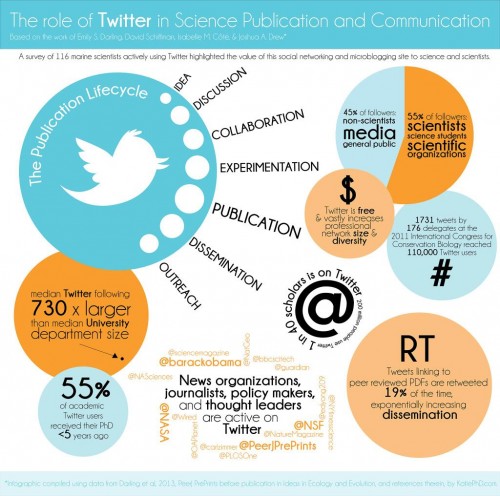