What makes the US health care system so expensive – Outpatient Care 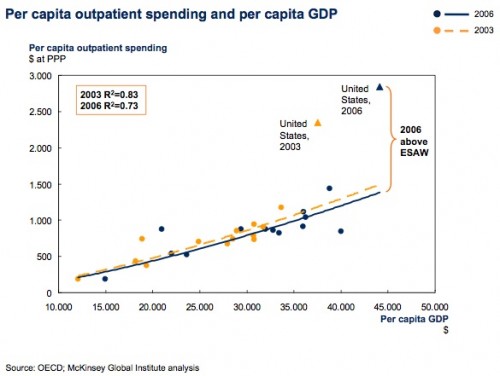 Outpatient care can be a slightly misleading term, as it also includes same-day hospital visits and procedures.  In fact, these type of visits account for a significant amount of our “extra” spending, at $186 billion.  Physician office visits also account for a large amount of “extra” spending as well, at $151 billion.  Outpatient clinics add on another $71 billion of extra spending, and ambulatory surgery centers another $21 billion in “extra” care.

Now the fact that we’re spending so much on outpatient care isn’t necessarily a bad thing.  Same day surgery does cost less in general that longer inpatient stays.  But it’s undeniable that the incentives in the system to financially reward quicker and less invasive procedures have increased their use.  The financial rewards are much more for outpatient than inpatient care, and the fee-for-service mechanisms of the US encourage the use of more care.  In the UK, for instance, almost 60% of hernias are repaired as inpatient procedures; in the US about 11% of those procedures are done on an inpatient basis.

Other contributors to the increasing “extra” cost of outpatient care include physician salaries (covered in a future post), ownership in surgical or diagnostic imaging centers, and the use of more expensive technology, especially in a diagnostic capacity.  Emergency departments in the United States accounted for more than half of a significant number of outpatient visits and about $75 billion in outpatient costs.

So here’s our first bit of depressing news.  The single biggest contributor to the money we’re spending that’s “extra” is for medical care.  It’s not a company or a crook.  It’s for actual stuff that we seem to value.  I will get into some of the specifics of this in future posts, but the bottom line is that when we talk about cutting spending, we will need to talk about reducing this amount.  Especially since, if we were spending so much on care, we should expect to see impressive returns in quality (which we don’t).

We will need to talk, as a country, about spending less for things like outpatient care.  If we don’t, we won’t ever really get a handle on the costs of our health care system. 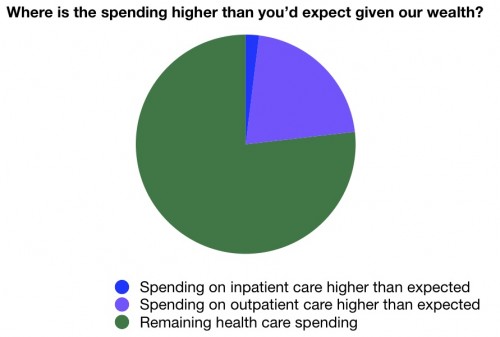 Bonus: Austin expanded on some of this here.

UPDATE: Although the report says it’s up to 56% of outpatient visits, this feels high to me and I can’t confirm it.  So until I can, I edited the text.