What makes the US health care system so expensive – Drugs

You knew I had to get around to this eventually.  Who hasn’t tried to blame the high cost of health care on pharmaceuticals?  There is, of course, some truth to that claim; but anyone who hoped to find that pharma is the big bad boss here is going to be disappointed.

Yes, the United States spends more for its pharmaceuticals than you would expect given our wealth. 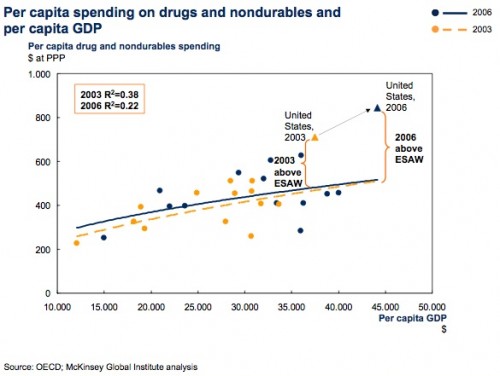 We spent more to the tune of about $98 billion in 2006.  Most of that was for drugs used on an outpatient basis.  Ironically enough, people in the US actually used about 10% fewer drugs than people in the other countries.  The problem is that our drugs, on the whole, cost about 50% more.  For name brand pharmaceuticals, we pay about 77% more.

Why?  Some will say that it’s because we’re wealthier and need to subsidize for the rest of the world.  But even if we paid more based on our relative wealth, it would come to about a 30% premium, not the 77% we do pay.  Some will say that it’s because we in the US subsidize the massive research and development for drugs.  But the entire bill for R&D for the pharmaceutical industry was less than $50 billion in 2006, far less than the “extra” we paid for drugs.  Some will say it’s because we are subsidizing massive marketing in the US, which might be upwards of $40 billion in 2006.  Again, far less than the “extra” amount.

Adding to this, we also tend to be early adopters of new drugs, which does raise our costs somewhat.  Drugs are approved about two years sooner in the US than in other countries, and we like to take them immediately.  Analysts say this makes the “average” pill taken in the US in 2006 about 118% more expensive than the “average” pill taken in other countries.

So to recap, although we actually take fewer drugs than people in other countries, we favor more expensive drugs, and we also pay more for the same drug.  Add in the fact that we may be subsidizing R&D and that we also subsidize drug prices for the rest of the world, and there goes about $100 billion.  This accounts for about 15% of our “extra” spending for health care. 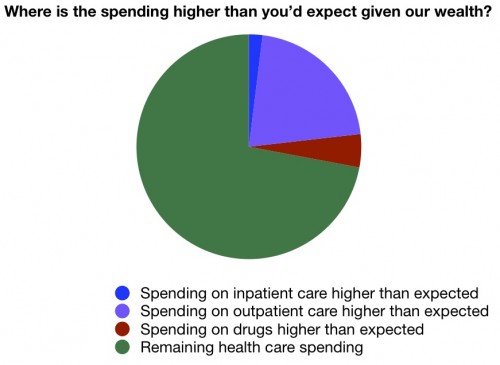