What makes the US health care system so expensive – Conclusion

If you haven’t read the introduction, go back and read it now.  That introductory post also includes links to all the posts in this series on what makes our health care system so expensive.  Each of these pieces discussed one of the components of unexpected spending that accounts for why our system is so expensive.

The posts all followed a common theme.  I highlighted how the United States is spending more than you’d expect given our wealth.  Much of this came from the McKinsey & Company study, Accounting for the cost of health care in the United States.

By now, I hope I’ve impressed upon you the complexity of the problem.  If you listen to politicians, and sometimes advocates, you would think the solution  is easy.  It’s pharma’s fault.  It’s the insurance companies.  It’s trial lawyers.  It’s hospitals. 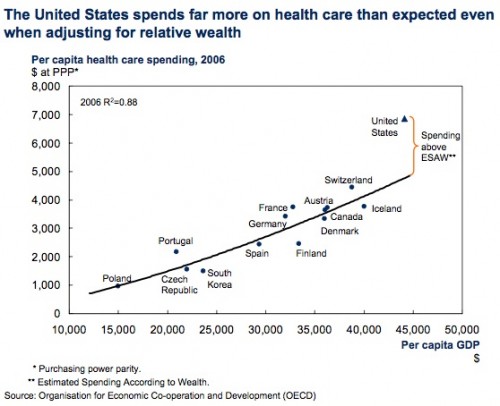 It’s all of those things, and more.  Our system costs more because just about every part of it just costs more.  And curbing that spending won’t be easy.  Much of what we choose to spend money on is stuff that we as Americans seem to value.  Much of that value, unfortunately, isn’t all it’s cracked up to be.

As I said at the beginning, spending so much extra money would be explainable if the outcomes we were achieving were spectacular.  But a surprising amount of the time they are middling at best and shockingly bad at worst.  I’ve asked you to take that on faith for too long.  So I am going to start preparing my next series for the blog, dedicated to discussing the various metrics and outcomes for the US health care system.

It’s been interesting to read the emails I’ve gotten over the last two weeks on this series.  Many of you seem to believe I’ve got some secret agenda with respect to how to fix this.  I don’t.  The truth is that I don’t think there is a simple solution.  Some of you on the right think that increased consumer costs will fix the whole thing.  It may, for some sectors, but it will do nothing in others.  Plus, I think it would negatively affect outcomes.  Similarly, tort reform isn’t the answer either.

Some of you on the left think it will be just as easy if you had your way.  But even if we went to a single-payer system, and significantly decreased insurance costs, that won’t touch the bulk of the problem.  Nor would singling out changes to pharmaceutical spending.

All of those things would help; they might even be steps in the right direction.  But there are a few things we all have to own up to.  The first is that most of the “extra” spending is in areas of care.  So, please, let’s stop pretending that cost containment can be painless or unnoticed. The second is that, to make cost reform feasible, we will need to have all these sectors share in the pain.  That won’t be popular, but at least it might be fair.  Moreover, it will increase the chances of success.

The final thing is that we have to stop looking for others to blame.  We are all to blame.  So let’s get past blame entirely, and start dealing with the problem.  Our goal isn’t to reduce our spending to that of other countries.  Our goal is to reduce spending so that it is in line with GDP.  It’s to get spending down to the curve in the above graph.  It’s to get spending down to just the green slice of the pie below: 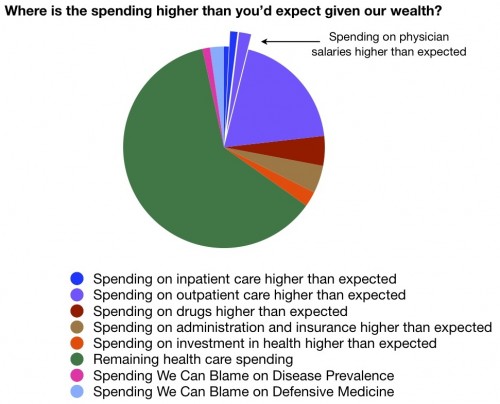 UPDATE: I had the wrong first graph in there.  Fixed it.