What is known about the effectiveness of AA?

I know people who have benefited from Alcoholics Anonymous (AA). But I can’t cite that as evidence of its effectiveness in a paper, not if I want that paper published anyway. So, I’m compelled to do the scholarly thing–which is what I want to do anyway–and examine the results of actual studies. You know, go to the evidence.

That’s what I did, by reading the Cochrane Database of Systematic Reviews paper on the topic (Ferri, Amato, Davoli 2009). The authors considered eight randomized controlled trials meeting their inclusion criteria and that compared AA and other twelve-step facilitation (TSF) programs to other psychological treatments. Seven trials were based in the U.S., one in Canada. The trials lasted from 15 weeks to three years. The table below summarizes the treatments examined by the studies. 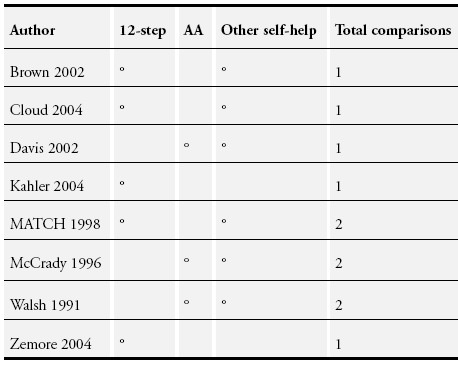 Here are the findings:

AA may help patients to accept treatment and keep patients in treatment more than alternative treatments, though the evidence for this is from one small study that combined AA with other interventions and should not be regarded as conclusive. Other studies reported similar retention rates regardless of treatment group. Three studies compared AA combined with other interventions against other treatments and found few differences in the amount of drinks and percentage of drinking days. Severity of addiction and drinking consequence did not seem to be differentially influenced by TSF versus comparison treatment interventions, and no conclusive differences in treatment drop out rates were reported. Included studies did not allow a conclusive assessment of the effect of TSF in promoting complete abstinence.

No experimental studies unequivocally demonstrated the effectiveness of AA or TSF approaches for reducing alcohol dependence or problems.

If you were hoping for AA and TSF programs to be shown to be tremendously effective, these result might seem disappointing. But what they’re really saying is that, based on studies examined, AA and TSF are no more effective than other treatments to which they were compared. So, a full interpretation depends on the nature of the comparison treatments. These included cognitive-behavioral therapy and motivational enhancement therapy, relapse prevention, educational interventions, “minimal treatment” (I don’t know if that has a technical definition).

At this point, I do not know enough about the other treatment types to judge whether it is promising or disappointing that AA and TSF are about as effective. Maybe that’s good. Maybe not. Maybe some therapies are easier or cheaper to implement. Maybe AA/TSF are the easiest/cheapest. I’ll keep reading and let you know. (Or you tell me, if you know.)