For vaccines, positive externalities include herd immunity and reduced transmission of the disease. But vaccines also have potentially negative (or offsetting) external epidemiological effects: namely serotype replacement. If you vaccinate a population against seven types of pneumococci, the prevalence of the other types will shift over time, to some degree replacing the targeted pathogens. This may still yield a net improvement, so long as the replacement strains are less pathogenic. For example, the pneumococcal vaccine was introduced in England and Wales in September 2006. The vaccine worked against the targeted serotypes, but the overall trend of invasive pneumococcal infection was less clear in some age groups: 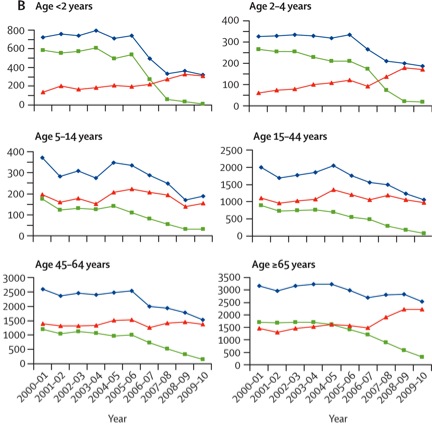 1. Vaccines can generate negative epidemiological externalities that should be addressed in cost-effectiveness studies and during review for marketing approval.

2. Ecological & evolutionary models are appropriate for vaccines and antibiotics – when we intervene, we are changing the biological environment; ecological and evolutionary responses should be anticipated.

n.b. – I’m not saying vaccines are dangerous or unwelcome – they are clearly a powerful tool for public health.

A review of evidence and ongoing studies in HPV:  Bonanni P, et al. A summary of the post-licensure surveillance initiatives for GARDASIL/SILGARD. Vaccine 2010;28:4719-30.