My colleague Aaron Carroll wrote last week that directly charging consumers for part of their health care costs (the practice known as cost-sharing) can harm the health of poorer or sicker people. But for the rest of us, it seems to reduce spending without harming health. This is the basic conclusion of a famous 1970s experiment funded by the RAND Corporation that randomly assigned families to different levels of responsibility for medical costs.

But would even more cost-sharing lead to savings as significant as those already seen? Recent studies suggest not.

The results of the RAND experiment are impressive. For example, families in the study that were responsible for 95 percent of costs of care (up to a cap of $1,000) used far less of it and spent 30 percent less than those with full coverage. And, apart from the poorest families with relatively sicker family members, this lower use of care did not adversely affect health.

The extent to which the RAND study results apply today is controversial. On the one hand, its study design — explicitly randomly assigning families to different plan types — is the gold standard and has not been replicated since. This alone makes the study’s findings quite significant. On the other hand, the study was conducted over three decades ago, when medical care and health insurance differed from that of today. More recent studies with good methods suggest we should be cautious in extrapolating the RAND experiment’s results.

Consider, for example, the trend toward higher-deductible plans, which require customers to pay more out of pocket before coverage kicks in.

One thing high-deductible plans will certainly do is attract relatively healthier enrollees. Healthier consumers are more likely to welcome paying higher deductibles in return for lower premiums. When disproportionate numbers of them enroll in such plans, the plans will look as if they spend less than plans that cover a more normal mix of customers. A recent study published in the journal Health Services Research showed that when large employers offer high-deductible plans alongside traditional plans, the high-deductible plans can attract enrollees that are 26 percent cheaper to cover because of their health characteristics. That’s a cost advantage that has nothing to do with how the plan creates incentives for lower health care use, but rather with the type of people attracted to the plan. 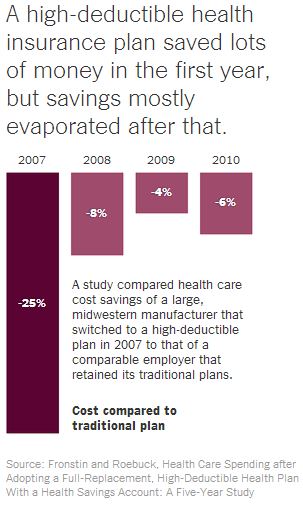 Though the study found large initial decreases in health spending, they were not fully sustained. Spending under the high-deductible plan fell 25 percent in its first year, consistent with the 30 percent found in the RAND study, but much of that reduction in spending evaporated over time: Spending was only 4 percent to 8 percent lower in the subsequent three years.

Yes, saving another 5 percent or so in health care costs is not nothing. But a one-time, 5 percent reduction in costs (and that only for the portion of the population eligible for and able to afford high-deductible plans) will swiftly be overtaken by annual health care cost inflation. It may delay the moment of reckoning, but won’t avoid it.

Why most of the savings evaporated after the first year is not clear. The study’s authors theorized that as time goes on, people figure out how best to use their plan to get the care they need. It is also possible that people postponed needed care in the first year to avoid paying the deductible, but couldn’t put it off forever.

There’s another good reason savings were more modest than those seen in the 1970s RAND study. Today, even traditional plans — ones that aren’t considered “high-deductible” — require consumers to pay something (and sometimes a lot) out of pocket. The difference between these plans and high-deductible plans isn’t nearly as great as it was when the RAND study was conducted, and not enough to produce anything like 30 percent more in savings.

In fact, this is part of the legacy of the RAND study. It helped justify the prevalence of cost-sharing that’s so pervasive today. With it, we may have already wrung out a great deal of the savings that higher cost-sharing can foster.