Uninsured in Texas – just the facts

In the comments to my Gov. Perry post yesterday, TIE readers asked for more facts about the uninsured in Texas. Happy to oblige.

1. Texas is clearly in last place for insurance coverage, with 24.8%; the nearest “competitor” is New Mexico at 21.8%. Massachusetts has the highest rate of coverage, with only 5% uninsured (US Census, Comparison of Uninsured Rates Between States Using 3-Year Averages:  2008-2010).

[h/t to Mark in the comments] 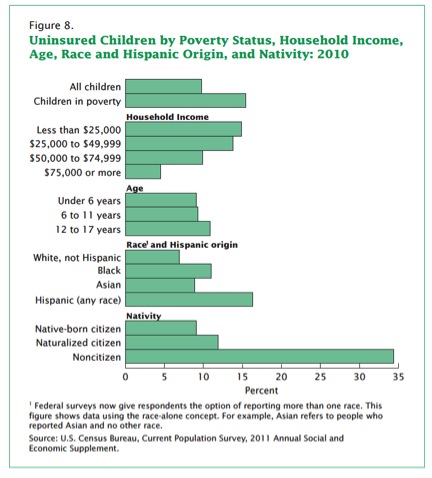 7. Health status indicators in Texas are near average and sometimes above average (infant mortality rate), but these statistics are not adjusted for the average age of state residents.

8. Uninsured in Texas by race

Sources: as linked above; generally see US Census 2010; for a nice report-generating interface, see KFF.