Unemployment is also an uninsurance problem

The CDC has released a report entitled, “Health and Access to Care Among Employed and Unemployed Adults: United States, 2009–2010“. Key finding: 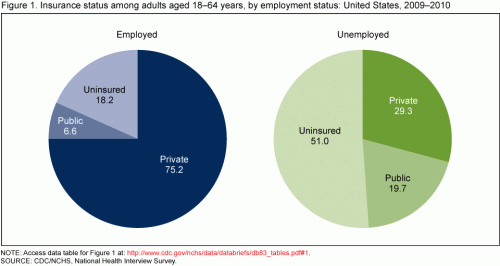 Many people like to think that being uninsured is a “choice”. And they’re correct, in the sense that you can “choose” not to buy insurance. I get that. But many people “choose” not to buy insurance for the sole reason that it’s crazy expensive. The average – not gold plated, but average – employer sponsored insurance plan for an individual plan in the United States last year was $5429. And that was just the premium. It didn’t include deductibles, co-pays, or co-insurance. The average family plan was $15,073. The median salary in the US, on the other hand, was less than $50,000 for households. For individuals, the median paycheck is $26,364.

When you’re making that amount, and you lose your job, paying for that insurance plan is no longer possible. Paying for COBRA is even harder, as it’s usually more expensive. So sometimes you get poor enough to go on Medicaid. Or, if you’re in the majority of states that offer no Medicaid benefits whatsoever to adults who aren’t parents of children, you go uninsured.

In case you haven’t noticed, the economy is hurting. Unemployment is very high, especially in groups that tend to also need health care the most. At times like this, it’s hard to imagine attacking the safety net programs that protect the poorest among us. Without them, the uninsurance rate among uninsured adults would be much, much worse.