I got a nice email from Charles Orenstein this morning telling me about a new ProPublica app with which you can shop for exchange plans, and see how things have changed from last year to this one. Just for the heck of it, I entered data for my family of five and took it for a spin.

Here’s the first plan I checked, a silver plan offered by Anthem: 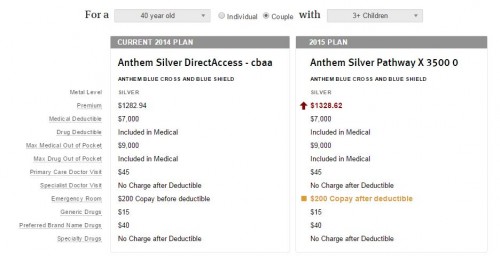 The good news, I suppose, is that premiums have only gone up by 3.6%. That’s a reasonably small amount, when it comes to health care spending growth. The only other major change was that a co-pay for the emergency room was added after the deductible was met. So… hooray?

But consider this. The deductible for this plan is $7000. That means that, unless you make $140,000 a year, this alone leaves you underinsured. Yes, cost-sharing subsidies will help reduce this amount for those at the lower end of the socio-economic spectrum, but not as much as you’d think. And a lot of people won’t get cost-sharing subsidies, even if they’re getting help covering their premiums.

Remember that we don’t consider this catastrophic care. We don’t even consider this high-deductible, or consumer driven, care. This is comprehensive coverage in the United States of America.