UK Report: Steps we can take now on antimicrobial resistance

In London this morning, the second Report on antimicrobial resistance has now been issued by Jim O’Neill. While many complex issues require further study on resistance (prior TIE posts here), the Report finds sufficient evidence on five issues to warrant action now:

O’Neill is right that there is broad consensus in the policy community for all five, and has been for some time, with the possible exception of number 4. The human capital issues have only been recently raised with sufficient vigor, most notably by our colleagues over at Controversies in Hospital Infection Prevention (especially the famous dumpster fire post and its sequel – instant classics). So let’s focus on the human capital section of the O’Neill Report.

First, follow the money, and ID docs are among the worst paid specialists in the US. Train for several additional years, take difficult call schedules, but make less money than your peers: 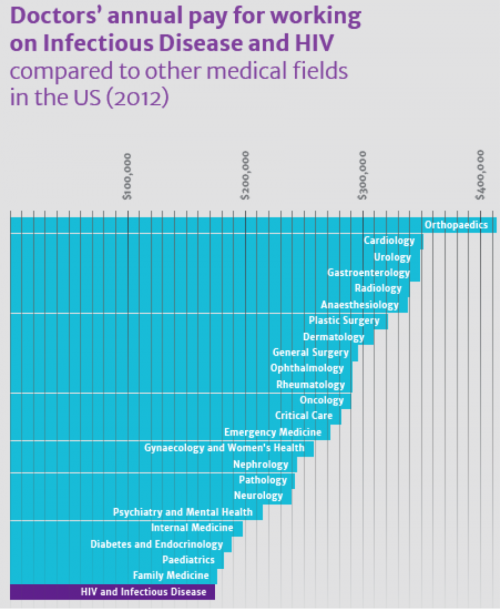 Second, building on the analysis by the CHIP crew, when medical residents match in the US, one of the few unfilled specialties is ID, with a large number of programs having unfilled slots. Every unfilled slot is a loss to future efforts to control hospital infections. Applications for the better paid specialties are robust by comparison: 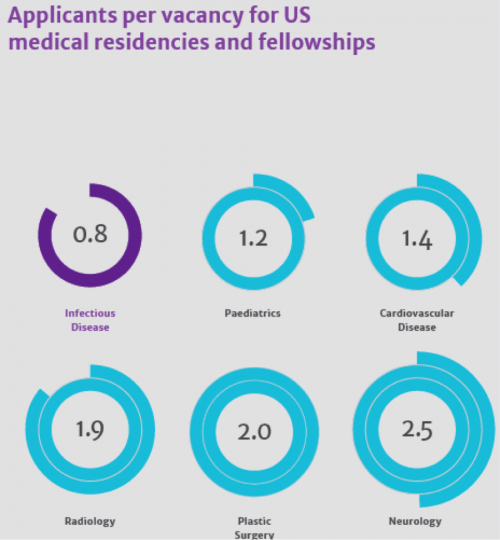 Third, the Report found evidence that citation rates are lower for journals specializing in resistance and microbiology, which makes academic careers and grant funding more difficult when compared to “hot” fields like cancer.

I also worry about the effect of flat to declining research expenditures in bacterial research. R01 grants are always difficult to start a career as a researcher, but in bacterial fields they are harder still. Given the robust funding over the past decade for some biodefense threats like anthrax or plague, a young researcher might reasonably choose these organisms instead of those responsible for large impacts on current human health, such as gonorrhea, acinetobacter, e.coli or staph.

For the White House plan on these issues, see Maryn’s summary here. Hopefully, Congress will work with this budget proposal and move some significant funding forward.