Dan Diamond of The Advisory Board Tweeted the following at me at 1:05PM EST today.

Notice that he prefaced his tweet with a “.@afrakt” (see the period?) and not just a “@afrakt”. That’s because Dan wanted all his followers to see his tweet. Starting the tweet with “@afrakt” (no period) would only allow those who jointly follow me and him to see it. (This is not something new Twitter users tend to know, but it is worth knowing, so learn it!)

However, not all of Dan’s followers saw this tweet. In fact, it only was sent to our joint followers despite the “.” preface. Conclusion: all of you Twitter users out there who think a “.” guarantees that all your followers will see your tweet are wrong. Let that sink in. Think about all those tweets you explicitly put a “.” in front of so that your followers would see them. Is your face starting to twitch yet?

As a demonstration that not all of Dan’s followers saw the tweet above, three of them sent Dan screen shots, which he shared with me. (Yes, we orchestrated this little experiment.) One of them is below. The others show the same thing: Dan’s tweet is not there. If it were, it’d be the second in the list since this is a 1:09PM screen shot and the tweet was at 1:05PM.

Sidestepping the question as to why Dan has any followers that don’t also follow me (seriously!?), what’s going on? Why isn’t Twitter working the way you and I think it should? Keep reading below the image for the answer. 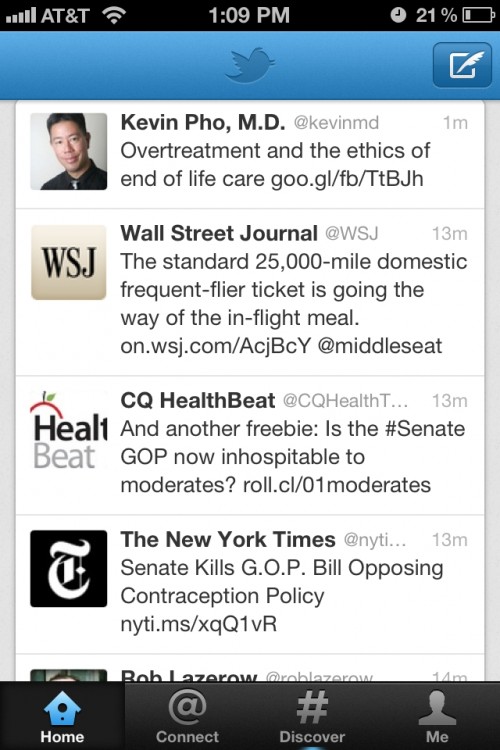 Dan initiated his tweet by “replying” to one of mine (i.e., he clicked “reply”). Back in 2009 Twitter changed what “reply” means. But even after that change, prefacing with a “.” did permit all your followers to see the reply (or so I’ve been told). This seems to be one of the most important early lessons most  learn on Twitter. There are loads of blog posts out there that explain this usage, and many since 2009.

Now even that has changed. Clicking “reply” now means that only joint followers see the tweet even if you prefix it with a “.” (or anything else for that matter). You can still tweet at (@) someone with a “.@” construction and have all your followers see it but not if you click reply. When did this change occur? I cannot find anything on the internet that documents it. Is this the first post to do so?

Even though there is a workaround (don’t use “reply”), this is still a big deal. Here’s why: Replying by clicking “reply” keeps the thread intact so that one can see the full thread (conversation) later. Initiating a new tweet so you can really “.@” to everyone breaks the thread. The intended reply is not really a “reply” as Twitter knows it (or would know it). That’s a shame. I often open up conversations to catch up. It’s near impossible to do that with a busy Twitter stream otherwise. As people abandon “reply” to make “.@” work the way it used to, fewer conversations will be whole. That makes me angry. Now my face is all twitchy. Yours should be too.

So, Twitter lost something useful by dumbing down what “reply” does. I hate to say it, but it seems like they need a “reply all” button.

UPDATE: Dan has been tracking this story and tells me that it appears Twitter has been changing their code. So, folks out there testing “.@” replies may be getting different results than we show above for that reason. Also, there may be app-specific issues. The landscape on this is confusing. I hope some real tech writer will sort it all out, possibly getting some comment from Twitter.

UPDATE 2: The word on the Internet is that this is a bug. I hope it is fixed or better documented so that users can more easily learn how to use Twitter.