Training your brain so you don’t need reading glasses

The following originally appeared on The Upshot (copyright 2017, The New York Times Company).

By middle age, the lenses in your eyes harden, becoming less flexible. Your eye muscles increasingly struggle to bend them to focus on this print.

But a new form of training — brain retraining, really — may delay the inevitable age-related loss of close-range visual focus so that you won’t need reading glasses. Various studies say it works, though no treatment of any kind works for everybody.

The increasing difficulty of reading small print that begins in middle age is called presbyopia, from the Greek words for “old man” and “eye.” It’s exceedingly common, and despite the Greek etymology, women experience it, too. Every five years, the average adult over 30 loses the ability to see another line on the eye reading charts used in eye doctors’ offices.

By 45, presbyopia affects an estimated 83 percent of adults in North America. Over age 50, it’s nearly universal. It’s why my middle-aged friends are getting fitted for bifocals or graduated lenses. There are holdouts, of course, who view their cellphones and newspapers at arm’s length to make out the words.

The decline in vision is inconvenient, but it’s also dangerous, causing falls and auto accidents. Bifocals or graduated lenses can help those with presbyopia read, but they also contribute to falls and accidents because they can impair contrast sensitivity (the ability to distinguish between shades of gray) and depth perception.

I’m 45. I don’t need to correct my vision for presbyopia yet, but I can tell it’s coming. I can still read the The New York Times print edition with ease, but to read text in somewhat smaller fonts, I have to strain. Any year now, I figured my eye doctor would tell me it was time to talk about bifocals.

Or so I thought.

Then I undertook a monthslong, strenuous regimen designed to train my brain to correct for what my eye muscles no longer can manage.

The approach has been reported in the news media, and perhaps you’ve heard of it. It’s based on perceptual learning, the improvement of visual performance as a result of demanding training on specific images. Some experts have expressed skepticism that it can work, but a number of studies provide evidence that it can improve visual acuity, contrast sensitivity and reading speed. 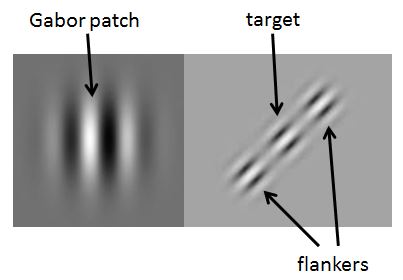 The training involves looking at images called “Gabor patches” in various conditions. Gabor patches optimally stimulate the part of the brain responsible for vision. A great deal of the training involves trying to see Gabor patches placed between closely spaced, distracting flankers. In training, the flanker spacing is varied, the target contrast is turned way down, and the images are flashed on a screen for fractions of a second — to the point that one can barely see the target.

Do this and similar exercises hundreds of times over multiple sessions weekly; continue for months; and, gradually, presbyopia lessens, a number of studies show.

One study also examined functions of the eye itself and found none of these improvements were because of changes in the eye. They’re all in the brain.

Various smartphone apps say they offer this kind of vision-improving training; I used one called GlassesOff, the only one I found that was backed by scientific studies.

Perceptual learning can improve the vision of people who already see quite well and those with other conditions. For example, a study tested the approach in 23 young adults, around age 24. Compared with a control group of 20 young adults, the treatment group increased letter recognition speed. Similar training is an effective component in treating amblyopia, also called “lazy eye,” which is the most frequent cause of vision loss in infants and children, affecting 3 percent of the population. It may also improve vision in those with mild myopia (nearsightedness).

It should be acknowledged that some researchers involved in many of these studies have financial ties to GlassesOff. However, other studies with no commercial links obtained similar results, and several scientists I spoke to, including those without ties to GlassesOff, thought the science behind the app was credible. One study published in Psychological Science trained 16 college-aged adults and 16 older adults (around age 71) with Gabor patch exercises for 1.5 hours per day for seven days. After training, the older adults’ ability to see low-contrast images improved to the level that the college-age ones had before training.

Scientists don’t know exactly how perceptual learning relieves presbyopia, but they have some clues based on how our brain processes visual information.

After first taking in “raw data” of an image through the eye, different sets of neurons in the brain process it as separate features like edges and colors. Then the brain must coordinate activity across sets of neurons to assemble these features into recognizable objects like chairs, faces, letters or words. Reading at our normal pace, the brain has only about 250 milliseconds to do this work until the eyes automatically move onto the next letter or word. Once they do so, we’re taking in more information from whatever the eyes focus on next. If we haven’t yet processed the prior set of information, we can’t understand it.

Visual processing time is challenged and slowed by noisy images, low contrast or closely spaced information (like small fonts). There is a bottleneck in the brain as it attempts to build and then comprehend the image. Therefore, enhancing and speeding up the ability to process image components — through perceptual learning — improves a wide range of vision functions.

What’s surprising is that this is possible in adult brains. Neuroplasticity — the ability of the brain’s processing functions to change to acquire new skills — is most strongly associated with childhood. It’s still more pronounced in children than adults, but for some skills, including vision, the brain is more malleable than once thought.

The training with GlassesOff is long and challenging. I found it fun initially, perhaps because it was new. But weeks into it, I began to dread the monotonous labor. Yet, after a couple of months, the app reports I can read fonts nearly one third the size I could when I started and much more rapidly. According to feedback from GlassesOff, my vision after training is equivalent to a man about 10 years younger than my age. If I reach 50 — the age at which almost everyone needs corrective lenses to read — and still don’t need reading glasses, I may conclude that the training has paid off.

As apps go, GlassesOff is not cheap. I paid $24.99 for three months of use — long enough to get me through the initial program. Upon completion, I was invited to pay another $59.99 per year for maintenance training. It’s a nice option, but the hard work and price probably mean that the bifocals market will remain strong.