This is why we can’t have nice things

Importance  Little is known about the deadoption of ineffective or harmful clinical practices. A large clinical trial (the Normoglycemia in Intensive Care Evaluation and Survival Using Glucose Algorithm Regulation [NICE-SUGAR] trial) demonstrated that strict blood glucose control (tight glycemic control) in patients admitted to adult intensive care units (ICUs) should be deadopted; however, it is unknown whether deadoption occurred and how it compared with the initial adoption.

Design, Setting, and Participants  Interrupted time-series analysis of 353 464 patients admitted to 113 adult ICUs from January 1, 2001, through December 31, 2012, in the United States using data from the Acute Physiology and Chronic Health Evaluation database.

So here’s the deal. Some years ago, a study came out which said that there was a benefit to keeping people in the intensive care unit under tight glycemic control. This meant that we had to monitor people’s glucose levels closely and keep them between 80 and 110 mg.dL. The rationale for this is based on lab data and observational studies that showed that having tight control was associated with less hyperglycemia, fewer infections, and a greater chance of survival.

When a large randomized controlled trial was finally done, it showed that providing tight glycemic control to mostly surgical patients in ICUs led to 1 life saved for every 29 patients treated. That’s pretty awesome. So this became recommended practice.

Of course, this being medicine, soon we were providing tight glycemic control not only to critically ill surgical patients, but also non-surgical patients. Cause that’s what we do.

Later, another study was done, called the Normoglycemia in Intensive Care Evaluation and Survival Using Glucose Algorithm Regulation (NICE-SUGAR) study. This was the biggest multinational RCT to examine tight glycemic control in a varied cohort of medical and surgical ICU patients. It showed that tight glycemic control increased (not decreased) the risk of severe hypoglycemia and increased 90-day mortality.

This research looked at how practice changed before and after the publication of the first study and the second study from January 1, 2001 through December 31, 2012.

So before the publication of the first trial, about 17% of admissions to the ICU had tight glycemic control, 3% had hypoglycemia, and 40% had hyperglycemia. After publication of the first trial, each quarter there were 1.7% more increases with tight glycemic control, 2.5% more with hypoglycemia, and 0.6% fewer with hyperglycemia.

This is consistent with what we’d expect a slow, but steady adoption of tight glycemic control to do. 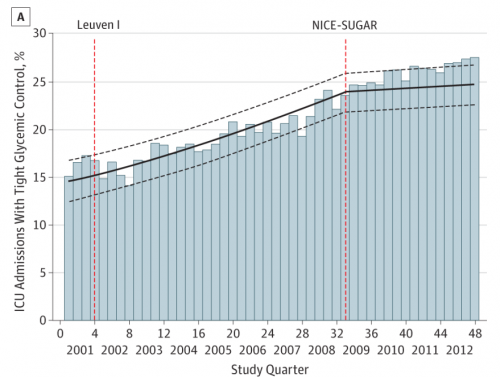 There are a few things worth noting here. The first is that it is hard to change physician behavior. Even with the first trial, it took years for people to adopt the use of tight glycemic control. But what’s even more important to see is that as hard as it is to get them to do something, it may be even harder to get them to stop doing something.

Unfortunately, doing more often does harm. It also usually costs more money. There’s very little incentive for industry to encourage this type of research. It’s a public good, and we’ve got to invest public money in it.