There are still many, many uninsured in the US

Matt Miller is a little ticked off. He wrote a piece yesterday where he accused the Republicans of abandoning the uninsured. There’s lots to love or hate about his piece given your political persuasion, but I found one paragraph stunning (emphasis mine)

Here’s what you should do, Mr. President. In the debates this fall, pull out a small laminated card you’ve had made as a prop for this purpose. Then remind Mitt Romney that the ranks of the uninsured today are equal to the combined populations of Oklahoma, Connecticut, Iowa, Mississippi, Kansas, Kentucky, Arkansas, Utah, Oregon, Nevada, New Mexico, West Virginia, Nebraska, Idaho, Maine, New Hampshire, Hawaii, Rhode Island, Montana, Delaware, North Dakota, South Dakota, Alaska, Vermont and Wyoming.

Read that list slowly, Mr. President. Then ask your opponent: Would America turn its back on the citizens of these 25 states if everyone there lacked basic health coverage? That’s what we’ve been doing for decades. You knew it was right to act when you were governor of Massachusetts, Mitt. How can you pretend we don’t need to solve this for the nation? And how can you object with a straight face when your own pioneering plan was my model?

I, along with others, have recently been spending a lot of time focused on the cost of health care. For my part, it’s because I’ve believed in my heart that we’ve made significant progress on the access issue (or at least we will in 2014). Yes, there will still be too many uninsured people in the US, but the ACA will reduce the number of uninsured people in the US by a significant number: 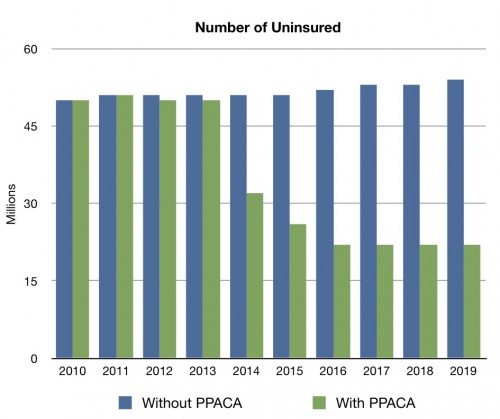 But with the recent Supreme Court decision to make the expansion optional, and many governors claiming they will forego it, leaving millions uninsured, access isn’t getting better as much as we thought. Moreover, if the ACA is repealed, then access isn’t helped at all.

I have to agree with Matt on one other thing. I’m more than willing to consider any plan put forward by anyone that manages to increase coverage to the extent that the ACA does. But if no such plans are coming forward, then it’s hard to see how we can do well by simply going back to the way things were before.