The world is still standing after a needed day off 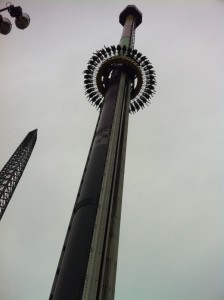 I took the family to Kings Island today. Because of threatening bad weather, the park was pretty much empty. This meant that my boys could drag me to every ride one after the other, with no chance for my nausea to recede. I’m really getting too old for this. That ride there on the right? That was the easiest one I did today.

And then I came home to find out that Austin had already solved all the issues for the Super Committee with respect to Medicare. Turns out I’m not needed there.

But before I go to bed, I want to take issue with something Ross Douthat said, and that Andrew Sullivan noted:

American liberalism risks becoming a victim of its own longstanding strategy’s success. Because yesterday’s liberals insisted on making universal programs the costly core of the modern welfare state, on the famous theory that “programs for the poor become poor programs,” today’s liberals find themselves defending those universal (and therefore universally-popular) programs at the expense of every other kind of government spending — including, yes, programs for the poor.

There’s always a danger in describing the motives and issues of groups you’re not a part of. The “liberals” Ross is describing here aren’t easily found.

If Ross means “progressives” when he says liberals, then I don’t know many who would say that Medicare as it stands is the best solution and should be untouched. Most would say that they want Medicare for all. There’s a lot of evidence that a single payer system would wind up saving us a lot of money over the system we have now. You may not like the idea, and some of its ramifications, but “liberals” would be just fine with it. And if they got their wish, then Medicaid would be utterly gone. They wouldn’t miss it for a second. The reason Medicaid has to exist (and that these “liberals” tolerate it) is that Medicare still isn’t universal.

If Ross means “Democrats” when he says liberals, then he’s not paying attention. Last I checked, Democrats voted for lots and lots of cuts to Medicare. So many, in fact, that one of the reasons they got voted out of power last Fall was because the opposing party attacked them for it. So to claim that those “liberals” have drawn a line in the sand against cuts to Medicare is laughable.

But just because they don’t like those ideas, doesn’t mean that they don’t exist. Liberals have them, liberals endorse them, and liberals have put some of them into law. I think this dilemma Ross is referring to is one conservatives imagine liberals face more than they actually do.

Or maybe the roller coasters scrambled my brains. I’m still a bit nauseous, and my body aches.