The Social Transformation of American Medicine 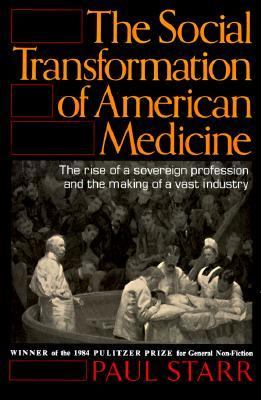 They say there’s no zealot like a convert, and that couldn’t be more true of me and my feelings about the US health care system.  I grew up in a medical household, thinking nothing was wrong with the system.  My care was top notch after all, and as far as I could see my Dad treated everyone, even those that couldn’t pay; that was enough for me.  In medical school, my feelings didn’t change.

Then residency hit.  I’m not going to go into detail, but me and residency didn’t get along too well.  I went 180 degrees and began to think the whole system was flawed.  That’s how I got into health services research.

As I started my fellowship, though, I still had no foundation.  I knew something was wrong, and I knew there had to be a way to make it better, but I had no idea where to start.  That’s when a professor placed The Social Transformation of American Medicine under my nose.

Forget that its author, Paul Starr, is a veritable healthy policy rock star.  Forget that it won the Pulitzer Prize.  Forget that I’m pretty sure I walked past the painting on its cover nearly every day of my first two years of medical school.  This book is a masterpiece.

Almost none of us understands the history of medicine.  We assume that the way it is now is the way it has always been.  But Dr. Starr shows otherwise.  In his own words:

I have divided this history into two books to emphasize two long movements in the development of American medicine: first, the rise of professional sovreignty; and second, the transformation of medicine into an industry and the growing, though still unsettled, role of corporations an the state.  Within this framework I explore a variety of specific questions, such as:

What’s even more remarkable is that even though this was written 25 years ago, it’s still completely relevant.

If you want to know what came before so that you can contribute to what comes next in a meaningful way, do yourself a favor, and read this book.