The meaning of health spending skewness

The skewed distribution of health spending means something important. I’ll get to that. But first, to the data! I showed the following in a prior post. It’s for the entire population (2004 data). 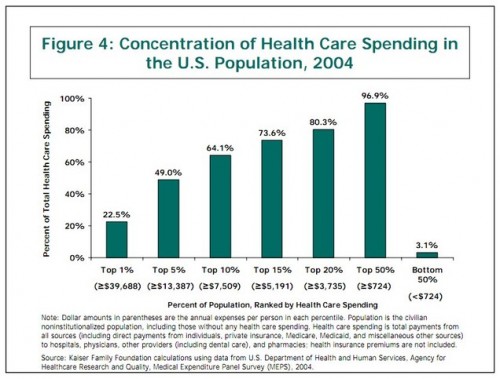 Some may have thought that the elderly were a big source of skewness. Not so. In a recent NEJM paper, Linda Blumberg presented in tabular form the distribution for the nonelderly (2011 data). I graphed it: 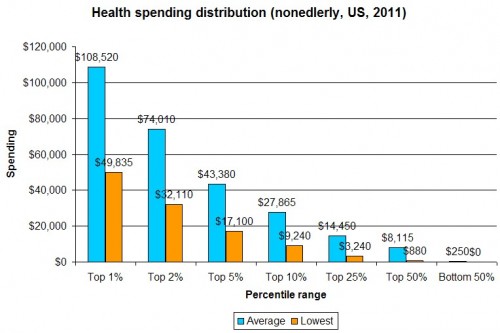 I know this graph is not in exactly the same form as the prior one. Study both for a moment or two until you get what they’re showing. Here’s the key: the blue bars in the second graph are the averages within the indicated percentile ranges. The orange bars are the lowest spending within each range. It’s the orange bars and their values (at the top of each bar) that are most comparable to the values in the prior figure (the ones in parentheses below the horizontal axis), though keep in mind that this is a 2004 vs. 2011 comparison and the percentile ranges are not the same in both graphs (some are, some aren’t). I don’t have the raw data, so this is the best I can do. Still, it is enough. Try to stay with me.

It appears to me that the degree of skewness for the entire population is not that different from the nonelderly population. What’s the point?

The point I want to make about this is not that health spending is skewed. We already knew that. The point is what it means. It means that for the vast majority of us, how we use health care is not how we should think about health care. We are not representative of where the money is. Unless you’ve had a major surgery or struggle with a costly, chronic illness, you’re not where the action is.

I confess, I do not have the intuition to think like a very sick individual who requires costly care to stay alive or to maintain some crucial functionality. I do personally know some people, even young people, who have required such care. I’ve spoken to them. But I am not them. They are the ones who we should be talking to in trying to understand how to address our health care cost problem. We should ask them how they would respond to incentives. We should try, as best we can, to walk a mile in their shoes. I bet that walk would be a lot harder than most of us think.