There is an interesting detail in the results from the Oregon Medicaid Experiment (read Austin and Aaron’s many recent posts on this blog for background). Recall how the study worked: Oregonians were given the chance to enter a lottery. If you won the lottery, you could submit an application and if you qualified you received Medicaid. But to the surprise of the state government and the study authors, a lot of the people who were given the chance to apply for Medicaid never followed through with applications. 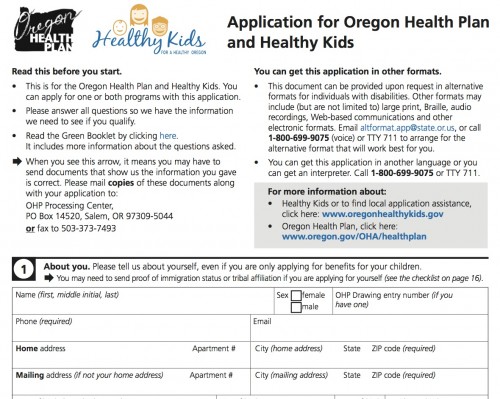 From the supplementary materials posted by the authors of the Oregon study:

29,664 households were selected by lottery. If individuals in a selected household submitted the appropriate paperwork within 45 days… and demonstrated that they met the eligibility requirements, they were enrolled… About 30% of selected individuals successfully enrolled. There were two main sources of slippage: only about 60% of those selected sent back applications… (emphasis added).

If your mental model of the uninsured is a poor family huddled outside of a hospital unable to find any way to pay for a doctor to give antibiotics to their coughing child, then this result doesn’t make a lot of sense.

It doesn’t make a lot of sense because health insurance is costly and yet most people who have it are very reluctant to give it up. Nearly everyone seems to think health insurance is important: liberals passed the Affordable Care Act to extend health insurance to more people and Republicans criticized the Democrats for cutting Medicare. So it was a surprise that given the chance, 40% of Oregonians who had entered themselves in the lottery did not apply after they won.

Why is this? Manzi believes that

Either: (1) a rational analysis indicated that the expected gain from the coverage being offered didn’t justify the time and effort of filling out a form and submitting it; or (2) the winner acted irrationally about long-term benefits versus immediate inconvenience.

Manzi leans toward (2) and with significant qualifications I agree with him. Some Oregonians may have found it easy to complete the forms (tens of millions of Americans are functionally illiterate). Nevertheless, it is likely that many simply failed to complete the form.

Of course, the poor have no monopoly on irrational imprudence. Ask me about the time that I procrastinated about renewing the registration of my car. Or ask the former employees of Lehman Brothers about whether they should have looked more closely at the details of some real-estate-backed securities. But Manzi’s right: humans, including poor humans, are often negligent and irresponsible. So what follows from this?

I think the failure of so many Oregonians to complete their applications illustrates the need for universal coverage. Here is how it works in Canada: you don’t apply for health insurance. You just get it. There may be only a few goods or services that should be supplied universally and paternalistically. However, precisely because of our irrational imprudence, if health insurance is important we shouldn’t make it hard for poor people to get it. (Whether health insurance in general or Medicaid in particular are worth having are important but separate arguments.)

Manzi also believes that the finding that so many people failed to follow through on their Medicaid applications suggests that giving them Medicaid will not improve their health. This is because staying healthy requires

consistent compliance over months and years with many of the therapeutic regimes necessary to achieve improvement on the physical health outcomes measured in the experiment – blood pressure, blood sugar and cholesterol.

If you can’t get it together to submit some forms, are you really going to forgo all those cookies and Big Macs?

Manzi is pointing at a real and daunting problem but a health insurance scheme can do only so much to get people to take better care of their health. The responsibility for health promotion for the healthy and chronic disease care for the ill falls on us, individually and collectively: health care providers, schools, employers, family, and friends. Insurance can and perhaps should be re-engineered to provide supporting incentives, but it is a very limited tool for health behaviour change.

(Thanks to Adriana McIntyre [@onceuponA] for pointers to information about the Oregon study.)