If we strictly follow current law, the CBO predicts that per beneficiary Medicare spending is on a steep, downward trajectory. That story is retold by Michael Chernew, Dana Goldman, and Sarah Axeen in their recent NEJM article How much savings can we wring from Medicare?

Take a look at the numbers from CBO, as republished by Chernew et al. (note the overlapping time periods)*: 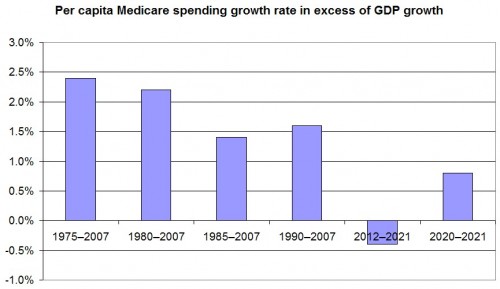 Recall how we’re all supposed to rejoice if we can just get health spending growth to slow to a rate below GDP + 1%. At least in per beneficiary terms, current law is expected (by the CBO) to do that. Of course it includes the massive physician fee cuts as dictated by the SGR, and we all know those won’t happen. There will be some type of doc fix, if only partial or interim. Still, if we’re really, truly serious about GDP + 1% or even, as the president proposed, GDP + 0.5%, we can’t afford a doc fix without cutting way back elsewhere.

Because of the fee cuts expected from the SGR and the Affordable Care Act (ACA), the current CBO baseline projection anticipates average per-beneficiary spending growth for the next 10 years of 0.4 percentage points below per capita GDP growth (see table). Such a low excess growth rate is unprecedented. Even in 2020, after the period of foreseen SGR cuts, excess spending growth will be well below its historical average, thanks to ACA-specified cuts.[…]

[T]he policy question becomes how much to raise taxes to finance the demographic trend, how much to cut provider fees, and how much to shift costs (or the responsibility for controlling costs) to beneficiaries. These are not comfortable realities, but they must be addressed.

And there we are. To achieve GDP + 1% (or 0.5%) growth in Medicare, somebody must feel the pain. Will it be taxpayers? Will it be beneficiaries? Will it be providers? Opinions vary. They are not mutually exclusive options, though some seem to insist they must be.

You know what would make the whole enterprise so much easier? A boost to GDP.

You know what would make it much harder? Not implementing or otherwise weakening the cost saving provisions in the ACA while not replacing them with something else equally or more effective. That’s why, if you care about the federal budget, taxes, beneficiaries, or providers, you can’t just talk about repeal. You have to also talk about replace. Moreover, you’ve got to get CBO to score your replacement as or more cost saving as current law. This is no easy task. I expect plans on my desk before the 2012 election.

* Note that the chart’s title says “per capita” but it is really “per beneficiary.”