On supply: In the January 2014 issue of the Journal of Health Economics, Kevin Stange documents the dramatic rise in nurse practitioners (NPs) and physician assistants (PAs) per capita in the last two decades. This is shown in the chart below, which also shows the rise in MD specialists and the nearly zero growth in family/general MDs. 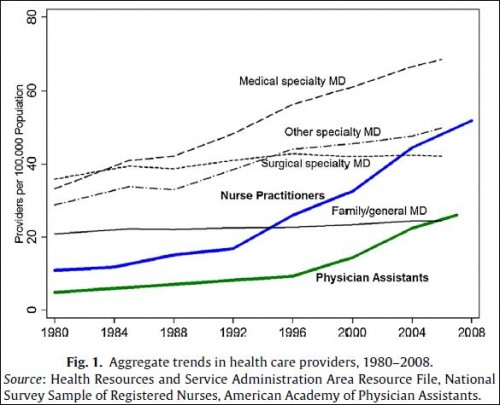 In theory, NPs and PAs can do much of the primary care work that family medicine and general MDs do. Were they permitted to do so, one might think they would alleviate primary care access issues, as well as reduce prices. Scope-of-practice laws that allow them to do so are supported and implemented with these goals in mind.

This paper is the first to assess the output market effects of the enormous increase in supply of nurse practitioners and physician assistants, the interaction of this growth with occupational restrictions, and an expansion of these providers’ scope-of-practice. My findings suggest that, across all areas, greater supply of NPs and PAs has had minimal impact on utilization, access, preventative health services, and prices. However, primary care utilization is moderately responsive to NP provider supply in areas that grant non-physician clinicians the greatest autonomy to practice independently. I find no evidence that increases in provider supply decreases prices, even for visits most likely to be affected by NPs and PAs: primary care visits in states with a favorable regulatory environment for NP and PAs. I also find that expansions in prescriptive authority for NPs are associated with modest increases in utilization and expenditure, though no consistent pattern emerges for expansions to PA prescriptive authority. Neither change appears to consistently reduce visit prices.

On demand: David Blumenthal (NEJM, 2004) summarizes the history of the physician workforce relative to the population and the history of prediction modeling thereof.

If the past proves to be prologue in our health care system, and if the growth in spending continues unabated, then the demand for physicians’ services is likely to increase and the prediction of physician deficits may very well materialize, thus vindicating the deficit theory. If the growth in spending slows — either of its own accord or by means of policy interventions — then the need for physicians may decline accordingly. The result could be an excess of physicians and the validation of the surplus hypothesis.

This makes sense to the extent a health care slowdown is due to lower utilization as opposed to lower prices. Since that appears to be the case with the recent/current slowdown, if it can be sustained, it may go a long way toward alleviating the pressure on the health care workforce that coverage expansion might exert.