In our Hamilton Project paper, Nicholas, Amitabh, and I propose a reference pricing scheme as one part of a package of ideas to manage the rate and composition of innovation of health care technology. If you’re already thinking about CalPERS’ reference pricing approach—about which I’ve written a lot (here’s one post)—you’re on the wrong track. Though we’ve never seen the distinction clearly drawn in the literature, there are two notions of reference pricing out there, and we mean the other one.

That other one has been used for prescription drugs in Canada (British Columbia), Germany, Norway, Spain, and other countries, as well as two employers (in the US and Canada)—see the systematic review of reference pricing by Lee et al. It also arises in the clever proposal by Pearson and Bach.

The basic idea is to group therapies (like drugs, but also procedures or technologies) according to their therapeutic effect. Then, one sets a one price—the reference price—for each group in some way. It could be the price associated with the most cost-effective treatment, for instance. Notice, however, that that price could vary across providers, maybe paying a higher quality provider more, another less.

I call this vertical reference pricing. It’s set within provider, but applies across technologies grouped by therapeutic effect. That’s very different from what I call the horizontal reference pricing of CalPERS, which sets one price for, say, a knee replacement and applies that across all providers.

Let’s play out the differences between vertical and horizontal reference pricing for the three prostate cancer treatments offered at three different hospitals and at prices shown in the chart below. (Yes, there are other prostate cancer treatments, like prostatectomy and watchful waiting, but for simplicity let’s pretend for the moment that these are the only three we know of.) 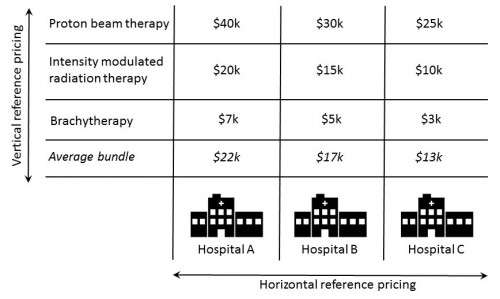 This puts considerable pressure on the patient to shop for a hospital that will accept the reference price as payment in full or for the patient to weigh the quality-price trade-off at hospitals that won’t. It puts considerable pressure on the insurer to set a price low enough to reap savings but high enough such that there are sufficient high-quality and affordable choices in the market, something not all markets can support. Adhering to a reasonable access standard would also impose an ongoing, management overhead cost. These are among the critiques one can level at horizontal reference pricing (see Frankford and Rosenbaum).

I refer you to our paper for the details on reference pricing and our other proposals, which complement it. You can also attend the event at Brookings tomorrow at which it will be discussed.

* I don’t know if that is, in fact, the most cost-effective therapy. Let’s just pretend it is for this example.