The GOP could kill traditional Medicare without premium support. Here’s how.

Not a word of this is intended as endorsement of any particular policy.

If you’re concerned that Speaker Ryan’s, and perhaps President-Elect Trump’s, ambition is to enact a premium support regime in Medicare that would effectively phase out the traditional program, you’re probably worried about the wrong thing. There’s a much simpler, and more politically feasible way to kill off traditional Medicare (TM), leaving only private plans in the program. Here’s how:

Step 1: Do not repeal the Affordable Care Act’s (ACA’s) cuts to traditional Medicare reimbursement rates. Over time, they will compound to deep cuts to what TM pays hospitals and doctors. Just look at these charts from the CMS Office of the Actuary: 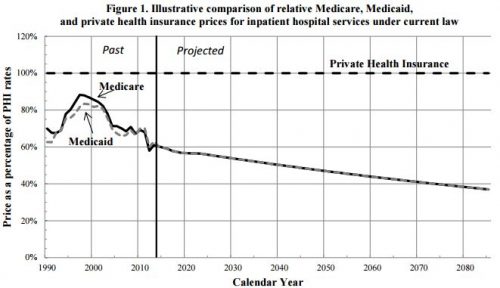 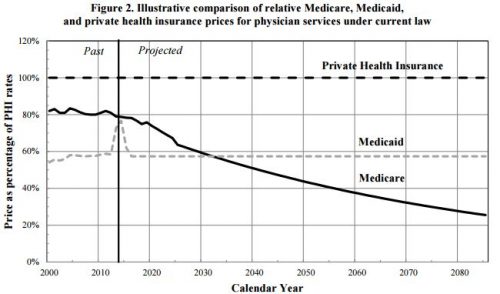 Leaving TM’s cost control in place might be viewed as a victory by Democrats. But, watch out …

Step 2: Sever the link between TM spending and government subsidies paid to Medicare Advantage (MA) plans. Right now, thanks to the ACA, payments to MA plans are tied to TM per capita spending. So, as per capita TM spending falls (or rises more slowly than the cost of care) — as it will given the charts above — so do subsidies paid to MA plans. This, more or less, keeps the attractiveness of MA and TM in balance. In contrast, more money to MA relative to TM allows plans to offer more benefits above and beyond TM, thereby enticing more enrollees away from TM (a good deal for beneficiaries is not necessarily one for taxpayers).

MA payments weren’t always tied to TM spending in this way. Pre-ACA, they weren’t. They soared. Severing that link again (paying them more) would make MA comparatively more attractive than TM to beneficiaries, and increasingly so over time.

Step 2 would require Congress to act. Could it be accomplished under budget reconciliation, thereby avoiding a filibuster? It sure seems budget relevant to me, but it’s not my call. More importantly, it’s deep in the weeds. Lots of Americans would not understand what had happened.

In contrast, pursuing premium support is a high-visibility and high-stakes drive into a political wall. Because it could erode TM in a more explicit way, resistance would be severe. Charges of taking away grandma’s health care would be easier to make. Either Speaker Ryan will recognize this in advance or he’ll pursue a premium support plan and fail. Then he’ll probably fall back to the sketch I just outlined.

That’s my prediction anyway. Don’t be surprised when it happens. And, if you care about TM’s viability, start worrying about this now.